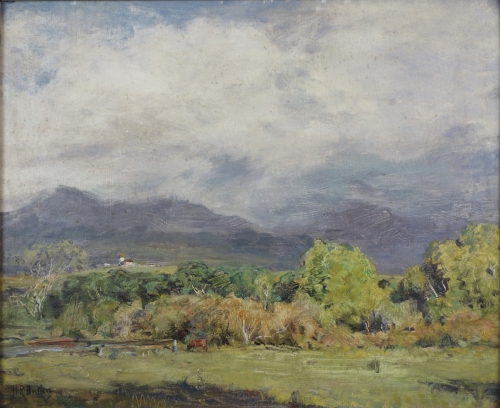 The first president and founder of the American Fine Arts Society, Howard Russell Butler was elected to the National Academy of Design in 1902. He was especially known for his paintings of landscapes and solar eclipses.

Butler was born in New York City and studied at Princeton and Columbia Universities. In 1877, when he graduated from Princeton, Butler received from his father the graduation gift of a train trip West to California. He and three classmates went on the adventure, which included an excursion to Yosemite where they visited with John Muir. From this time, Butler had an ongoing fascination with the West.

In 1882, he graduated from law school at Columbia University and practiced in New York City, but was unhappy with that career and turned to the development of his painting talents. In 1884, he and Frederick E Church opened a studio in Mexico. He then studied at the Art Students League, and was also in Paris where he became active in the American artist colony. Focusing primarily on color and light, he painted in the French countryside in loose, impressionistic style, and one of his painting companions was John Singer Sargent. By 1886, he was receiving honorable mention at the Paris Salon.

By 1908, he had done paintings of the California Coast, which he exhibited at the Buffalo Fine Arts Academy. From 1905 to 1907, and from 1921 to 1926, he lived in California, both Pasadena and Santa Barbara. In 1907, he produced a painting titled Arizona Badlands, which was a result of his earlier travels into the desert of that state. The Tucson Museum has a large collection of his desert pastels, many which were painted in the Mojave Desert of California.

In 1911, he moved to Princeton where he remained as a resident and had his studio. As part of his career, he became supervisor of astronomy exhibits at the American Museum of Natural History. In 1918, he was on the US Naval Observatory Expedition to Baker, Oregon, to paint the June 8 Solar Eclipse; in 1923, he painted the solar eclipse at Lampoc, California; and in 1925, he painted the eclipse at Middletown, Connecticut.

His western travels included a 1920 pack-trip with his family through Yellowstone where he made numerous watercolor sketches. Returning East, he had a one-man exhibition of his Yellowstone paintings at New York’s Century Club, and received much praise.