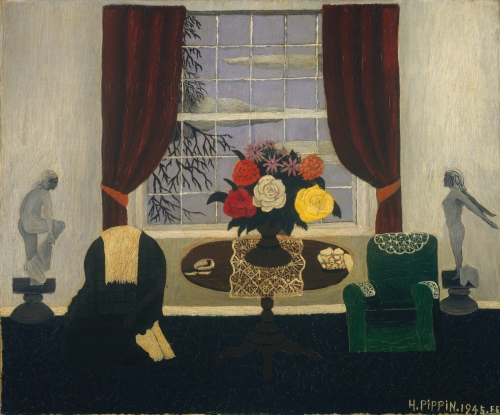 Horace Pippin was born in 1888 in West Chester, Pennsylvania. Pippin was one of the last of this country’s important folk artists. He was the grandson of slaves. He left school at fourteen, worked as a field hand in Goshen, New York and then enlisted in the Army. During World War I, a sniper wounded him in the right shoulder, partially paralyzing his arm. After the war, he was able to perform only light labor; he was a junk dealer and delivered laundry that his wife took in. He also began to paint, laboriously. He painted many genre scenes of black life: the war, the hearth, his favorite heroes, religious subjects, etc. He painted still life, and portraits of whites as well as blacks. He worked out of a tiny dark room in his home.

Pippin’s primitivism is a miraculously childlike vision sustained and disciplined without being dulled by a long professional career as a painter. It’s the paradoxically sophisticated primitivism of an artist who retains his way of looking at the world out of conviction, rather than out of ignorance of mainstream conventions. Pippin’s vision – his dream, as he called it, so overrode any concern for formal pictorial niceties that he was undaunted by loss of technical control when the sniper hit him during World War I. He returned to painting by simply placing the brush between his right fingers and pushing his arm around the canvas with his left hand.

Sources include:
Mark Stevens in Newsweek, August 22, 1977
Master Paintings from the Phillips Collection