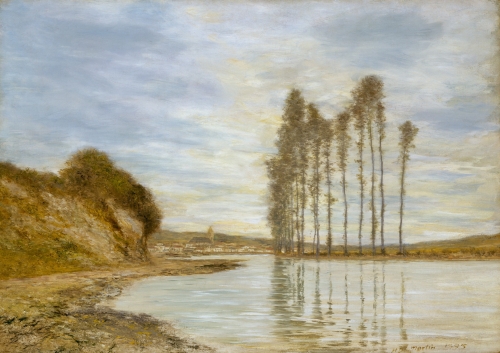 Homer Dodge Martin was one of the first artists to introduce Impressionism into American painting. He is known for his melancholy, poetic landscapes, with subtle color and treatment of light. Martin was part of a generation or group of artists whose works were transitional between the Hudson River School and the Barbizon group as it was called in France. This group crossed over from the early Hudson River School, with its attraction to the spectacular vistas of the American landscape, to the Barbizons’ rendering of landscape in a more straightforward, anti-classical manner. Returning to the United States, he was of considerable influence on the artist Nicholas Richard Brewer, another proponent of the Barbizon style, who met Martin in the early 1880s. Martin’s works often depicted Nature’s unforgiving and cold characteristics.

Martin was born in 1836 in Albany, New York and as a young man worked as a carpenter and architect. In 1852, he turned to painting, having been encouraged by sculptor Erastus Dow Palmer. Ten years later he moved to New York City, where he lived for thirty years.

Although he was primarily a self-taught artist, he did study briefly with landscapist James Hart. During his early years as a painter, he faced many hurdles, including his lack of professional training and his physical ailments such as melancholy, chronic eczema, and failing vision that rendered him nearly blind towards the end of his life.

After moving to New York, he began to paint areas in the upstate New York area including the Hudson River Valley, although it is believed that the Adirondacks provided Martin his favorite venue for sketching. He studied the Hudson River landscapes of John Frederick Kensett, and made friends with John La Farge, who was known for his landscapes and still lifes.

Martin made two European visits, the first of which was in 1876, and from that time, most of his paintings reflected Continental influences, especially his friendship with James McNeill Whistler and his exposure to the Barbizon School of painting. From that time his works were looser in style, softer and more muted, and blurred in details. In France, where he stayed from 1881 to 1886, he met Camille Corot and other artists of the Barbizon School, which flourished in France between 1830 and 1870, and which was just beginning to be introduced into the United States.

Towards the end of his career, in 1893, Martin and his wife moved to Minnesota, having visited there a decade before. He settled in Saint Paul, where he lived while struggling with cancer, failing eyesight, and mental depression and hoped that the clearer air of that city would improve his health. During those years in Saint Paul he was productive, creating works that tended towards abstraction and that have been called some of his finest such as Harp of the Winds: A View on the Seine (1895), (oil on canvas, The Metropolitan Museum of Art in New York City). Other typical works are Sand Dunes at Lake Ontario” and White Mountains, both at Metropolitan Museum of Art, New York, and Sea at Villerville, Kansas City Art Institute.

He became a member of the National Academy of Design in 1874, and in 1877 was one of the founders of the Society of American Artists. Near the end of his life, nearly blind, he painted Adirondack Scenery from memory.