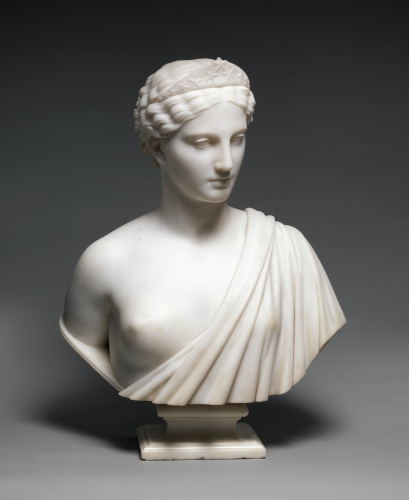 A preeminent Neo-Classical American sculptor of the nineteenth century, Hiram Powers was a carver in marble of figures including many subjects from Greek mythology. According to one source, his work, Prosperone, became “the most favored single piece among Powers’ work, and it was copied more times than any other work ever produced by an American sculptor”. His sculpture, Greek Slave, was “the best known work of the mid century”. (Samuels, 379)

Born on a poverty-stricken farm in Vermont, near Woodstock, in 1805, Powers had humble beginnings, being the eighth of nine children. His family moved to Cincinnati where from the ages of 17 to 23, he held jobs in the Luman Watson clock and organ factory, and he studied with portrait sculptor Frederick Eckstein from whom he learned clay modeling and plaster casting. He also took a job running the wax works department of Dorfeuille”s Western Museum, which included the execution of an animated mechanical depiction of Dante’s Inferno, something he accomplished by placing “clockwork mechanisms in a group of old wax figures which were remodeled by Powers”. (Falk, 2652)

In 1834, having gained the sponsorship of wealthy Cincinnati art patron Nicholas Longworth, Powers moved to Washington DC where a significant positive turning point in his career was the completion the next year of his sculpture of Andrew Jackson titled The Jackson and modeled directly from the President at the White House. The work was highly realistic of the sixty-eight year old man with his “wrinkled, sagging skin” (Baigell, 286). In turn, this success brought him additional prestigious commissions including John Marshall, John Calhoun, Daniel Webster, and John Quincy Adams.

By 1837, he was settled in Florence, Italy with his wife and two children, hoping to have greater access to marble and better trained Italian workmen. Helpful to him in getting settled and also influential upon his style, was sculptor Horatio Greenough, whom he knew from Boston. With money in his pocket from the DC commissions, Powers decided to focus on idealized subjects in addition to portrait busts for which he was prolific, completing 150 between 1842 and 1855. However, at that time, skillful execution of idealized figures was regarded as the test of competency as a sculptor, “a true artist by the standards of the day.” (Baigell, 286). Assisting him with his carving was an Italian workman and eventually a dozen assistants for his designs.

He used nude female models, which resulted, among others, in Eve Before the Fall and The Greek Slave. Railroad magnate James Robb of New Orleans had commissioned the piece in 1846, and upon its completion, immediate notoriety surrounded Powers because the subject was a nude woman with her hands in chains, and the struggle for independence from the Turks. Powers composed a sentimental story to accompany the piece, and the American public grew to accept it, even though the subject was nudity, which many persons found shocking. However, the girl was perceived as an innocent Christian whose innocence was underscored by her nudity. The Greek Slave had an extensive tour in America, making $23,000. for Powers as well as securing at that time “a reputation as the greatest of American sculptors.” (Baigell 287).

Powers continued to work in Florence, Italy, reportedly holding forth among the many tourist visitors and his sculptor peers in an autocratic manner. He rivaled unsuccessfully with Thomas Crawford in commissions for portraits of prominent political figures in Washington DC, although he did portraits for the House of Representatives of Benjamin Franklin in 1862, and Thomas Jefferson in 1863. In 1872, he did his last full-length work, which was a half-nude, running Indian maiden titled The Last of the Tribe.

Powers died in Florence, Italy in 1873. His son, Preston Powers, also a sculptor, supervised the Denver School of Fine Arts, which was operated at the University of Denver.