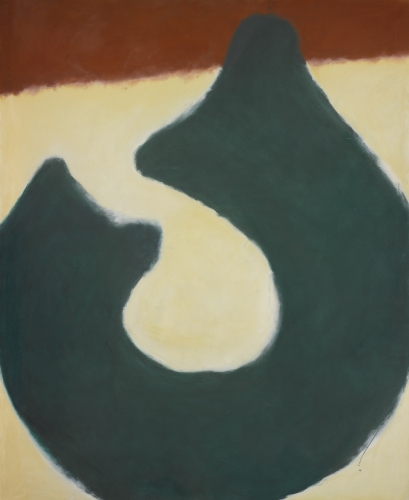 From college he went on to dental school, and it was there when he had to make anatomical drawings that he discovered he had a talent for naturalistic drawing. Ferber was encouraged by a teacher in dentistry, who was a collector of work by Abraham Walkowitz, to carry on with art as an “extra-dental interest.”

After a year of dental school, he began to attend the Beaux Art Institute of Design, which was distantly affiliated with the Ecole de Beaux Arts in Paris. Ferber attended at night from 1927 to 1930, working first from plaster casts and then from the model, while going to art galleries. During those years, he also traveled in Europe, where he was introduced to sculpture of Ernst Barlach and German Expressionism.

In 1930 he became a dentist. Shortly thereafter, he made his first wood and stone carvings, combining solid masses with blunt contours, as in To Fight Again, 1936-37, in the Museum of Modern Art, New York City. At the time, his subject matter was symbolic yet realistic.

In 1940, however, he began to make wood pieces by gluing and fastening with dowels, and through the mid-1940s, under the influence of European sculptors, Ossip Zadkine and Henry Moore, his forms grew more slender and open. Images of reclining women, for instance, became curved and bent arabesques in space.

After experimenting with soldered metal (by 1945) and the blowtorch (in 1949), Ferber evolved his style to include jagged forms that broke the once-flowing outlines of his earlier pieces. Created in the surroundings of Surrealism, the new sculptures were among the earliest Abstract Expressionist sculptural pieces then being made. Examples are Labors of Hercules, 1948, New York University and Portrait of Jackson Pollock, 1949, Museum of Modern Art, both in New York City.

The new pieces, abstracted from nature, appeared to some viewers as threatening with hooks, spikes, knobs and projections. They either sprawled around an implied center or lifted up vertically from their bases.

After receiving a commission for the façade sculpture of the B’nai Israel Synagogue, Millburn, New Jersey in 1950-52 one of several religious commissions, Ferber began to eliminate the sculptural base. Exploring this idea in both freestanding and hanging works, in 1954 he came upon the idea of “roofed sculpture,” in which parts were raised from a flat base and hung from an attached ceiling, as in Sundial, 1956, Whitney Museum of American Art in New York City.

By 1958, these pieces had been enlarged to architectural scale. Known as Environmental Art, they did not create voids and spaces within themselves as much as help define the space of the entire environment. One such piece is installed in the Art Gallery of Rutgers University where he had been a visiting professor. Through the 1960s, he explored related ideas using relatively thin rods of sculpture to envelop spaces. Some of these were made from Corten steel.

In the 1970s, Ferber began to devote considerable time to painting.