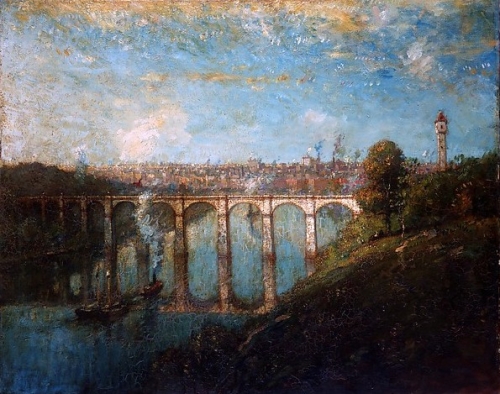 A key person in the establishment of the Old Lyme, Connecticut art colony in 1899, Henry Ward Ranger is regarded as the leader of the Tonalist movement in America and was a leading painter in this country in the late 19th and early 20th-centuries.

He was born in Geneseo and raised in Syracuse, New York, and in 1873, enrolled in the College of Fine Arts at Syracuse University, where his father was a professor of photography and drawing. Two years later, he became a re-toucher of paintings in his father’s studio and did not earn a college degree. He also spent much time in New York City, where he was a writer of music criticism and visited galleries, where he had his first exposure to French Barbizon painting. During much of the 1880s, he painted watercolors of marine subjects, and exhibited those in New York City, Boston, and Paris.

As a student in France, he became greatly interested in the Barbizon School of painters, and then a trip to The Hague, Holland, was even more influential when he met a large colony of Dutch painters called “The Hague School”, whose emphasis was on Realism and Tonalism. Their soft, Atmospheric and Tonalist style of sombre colors seemed to suit him. However, his soft colors later became a special problem for anyone trying to restore his paintings as it was difficult to distinguish original color from soil on canvases. He did his sketches “en plein air” but finished his paintings in his studio and often exhibited his sketches and paintings together.

In 1885, Ranger moved to New York City and took up easel painting increasingly favoring oils over watercolors. In 1892, he had a one-man exhibition at the Knoedler Galleries in New York City. Many of his works in that show were forest interiors and tree studies.

Gradually his palette lightened with color and luminosity suggesting the influence of George Inness. In the summer of 1899, Ranger discovered Florence Griswold’s boardinghouse in Old Lyme, Connecticut, and he returned in the summer of 1900. With his influence and the friendship of Florence Griswold, he became the leader of the artists’ colony of Old Lyme, “an American version of Barbizon” (Lowrey 162) for three years. However, the prevalent style changed to Impressionism with the 1903 arrival of Childe Hassam. He became disenchanted with painting at Old Lyme with the arrival of Childe Hassam in 1903 and the subsequent influence of his Impressionist style. In protest of the plein-air, fast painting, and lightened palette and abstraction of these Impressionists, Ranger, in 1905, moved farther down the coast to Noank, Connecticut near the mouth of the Mystic River.

Like many of his associates, he also maintained a studio in New York City where he was very prominent and often lectured and wrote about art and took an active part in the art community. He was a member of the National Academy of Design and the National Arts Club, and he wrote articles about art that were published.

When Henry Ward Ranger died in 1916, he was a childless widower and left his estate to the National Academy of Design to establish the Ranger Fund whose income was to purchase the works of living American artists beyond the age of forty-five.