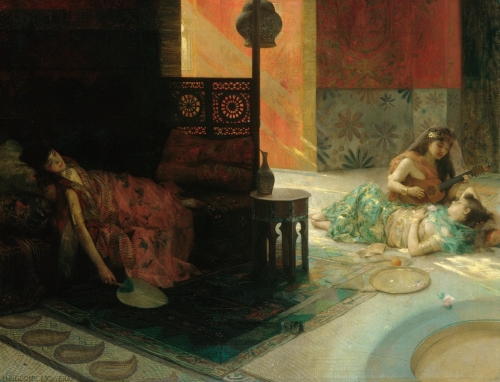 Born in Alexandria, Egypt on August 5, 1858, Henry Siddons Mowbray was raised by an aunt and uncle in North Adams, Massachusetts. He began working in his uncle’s chemistry business and in late 1877, took lessons from the landscape painter Alfred Cornelius Howland (1838-1909). A year later he left for Paris to work in Léon Bonnat’s atelier. By 1880, Mowbray exhibited a Young Bacchus (National Academy of Design) in the Salon, and he went to Spain that year to experience the works of Velázquez in the Prado. Soon, he was receiving criticism from Jean-Léon Gérôme, who influenced him to paint Near Eastern scenes. The Etchers and The Narration (both lost) were accepted into the 1883 Salon. The Alchemist (Kenneth Lux Gallery, New York), dated 1884, shows an interest in Dutch revival genre scenes, perhaps prompted by French Salon painters such as Jehan-Georges Vibert (1840-1902) who enjoyed painting cardinals sipping brandy, in a polished Flemish technique.

Mowbray returned to the States in 1885 and joined the Society of American Artists. His painting Fairy Music, from 1886 (Berry-Hill Galleries, New York) is a typical half-nude strumming a banjo: a pure studio confection. The National Academy awarded him the Clark Prize in 1888, the year of his marriage to Helen Amelia Millard. The couple visited Giverny during the summer of 1892 (The Hôtel Baudy guest register indicates the couple’s stay was 11 July-1 August). That summer, he could have met Thomas Meteyard, Dawson Dawson-Watson, among others. Meanwhile, he did illustration work for popular magazines, including Harper’s, Scribner’s, and The Century. By around 1897 Mowbray turned to mural painting. Mowbray was active as an instructor at the Art Students League between 1886 and 1901; he taught life classes there, then was appointed director of the American Academy in Rome (1902-04). Abel Warshawsky (1931, p. 17) claimed Mowbray was “inclined to savage criticism” as a teacher but he “taught drawing in a very precise, proficient manner.”

Both Thomas B. Clarke and William T. Evans purchased Mowbray’s easel pictures. Clarke owned The Evening Breeze (Private collection), exhibited in the World’s Columbian Exposition. According to Owens (1980, p. 85) the artist could not support himself from these works alone. Mowbray’s paintings fall into the category of Salon-style “Orientalism.” Exotic scenes, executed with attention to detail and an array of warm, sumptuous colors, these images of leisurely harem girls, musicians, and other romantic subjects easily recall other painters: Gérôme, Lord Leighton, Thomas Dewing, Francis Day, Francis Coates Jones, Will Low, and Francis Davis Millet. These painters reveled in depicting essentially inactive women in flowing, vaguely classical gowns, in a timeless setting, a favorite image of the American Renaissance artists. Unlike Delacroix, who was admitted to private harems, Mowbray composed these imaginative seraglios in his studio: props, such as a hammered brass table, appear in several paintings.

But Mowbray fell under the spell of the Italian Renaissance: “A fondness for the Italian art of the Renaissance came over me,” he explains in his autobiography. “I wanted above all things to do mural work” (quoted by Sherwood, 1928, p. 56). His first mural commission comprised nineteen lunettes for the Collis P. Huntington House in New York (1892). In 1897, Mowbray shared a commission with Edward Simmons to decorate the Frederick Vanderbilt residence, also in New York. During the execution of this work, Mowbray visited Pintoricchio’s recently restored murals in the Vatican (1492-94). The love of Pintoricchio brought Mowbray back to Rome again in 1902, when he was able to study the Vatican decorations intensely. Charles F. McKim, architect of the University, proposed copies of the Renaissance frescoes, to be installed by Mowbray. Some writers consider the work to be mere plagiarism (Larkin, 1949, p. 339). But it convinced J. Pierpont Morgan to engage Mowbray to decorate his famous library, also in an Italianate manner. Again, he went to the late Quattrocento master for inspiration. Mowbray did not work exclusively in a Renaissance style. His late easel paintings recall the work of the Flandrin brothers in the murals of St. Germain-des-Prés (Paris) in their strict planarity, harsh primitif contours, and flat, tempera-like hues. The artist passed away in Washington, Connecticut, on January 13, 1928, before the renaissance in American mural painting got underway.

Cortissoz (1930) admired Mowbray’s lofty and poetic ideas, his sound workmanship, his ability to integrate pictorial compositions into the architectural structure, and his recreation of “classical grace and restraint.” Mowbray occasionally evoked Dewing’s wistful vagueness, and before he became an American Renaissance decorator, he was not afraid to show brush strokes and to define objects in a painterly manner. Mowbray’s “Orientalism” was never as sharply rendered as Gérôme’s, and his softer style approaches more that of his compatriot, Frederick A. Bridgman.