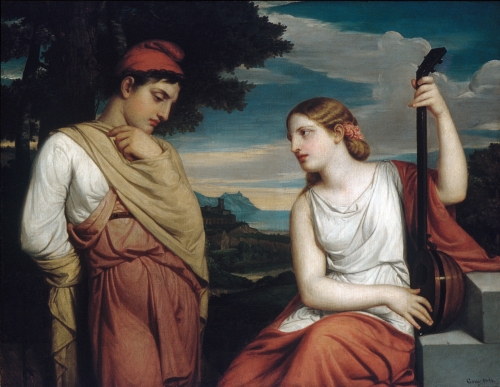 Henry Peters Gray, born on June 23, 1819, in New York, was a leading portrait and history painter of the mid-19th century. Of his history painting, it was written that Gray’s work “enjoyed the considerable success that had eluded the previous generation of American Artists. (Harding). His talent was encouraged by his father, a wealthy merchant, and Gray took his first art study at Hamilton College in Clinton, New York.

Then in 1838, he began his studies with Daniel Huntington, whose development, career and reputation were amazingly similar to Gray’s own, and they were also very close in age. That same year, Gray’s work was accepted for exhibition at the National Academy of Design*. Gray went to Europe in 1839 with Huntington and Cornelius Ver Bryck to study the Old Masters* and spent most of his time in Florence and Rome. He returned to New York in 1841 and during the next few years, established himself as a portrait painter, and also married Susan Clark, an artist.

With his wife, he made a second trip to Italy in 1845, and they stayed for a year, during which he produced several of his most characteristic paintings: Cupid Begging his Arrows, Proserpine and Bacchus, and Teaching a Child to Pray. Upon his return to New York, he gained a distinguished reputation, and was elected a National Academician at the National Academy of Design. Subsequently he was raised to positions of important leadership including nine years as Vice President beginning 1861, and then serving two terms as President, succeeding Daniel Huntington. In 1875, The Origin of Our Flag was one of the last of Gray’s exhibited works at the Academy.

In 1871, Gray who was then in poor health, returned to Italy where he spent four years in Florence, was rejuvenated by the warmer climate and painted prolifically. He spent the last two years of his life in New York City, where he died in 1877.

Classical subjects were his favorites, and, much influenced by Washington Allston, Gray was fond of studying and emulating the old Venetian masters, especially Titian. His work reflects his interest, with color inspired by the golden tones of Titian and Correggio. “Among his prized possessions was a large copy of Titian’s Venus of Urbino, which he believed to be a replica.” (Harding). When Gray died, his widow presented this work to the Academy Collection, where it remains Gray also respected American artists in their attempted movement to advance historical painting in pre-Civil War America, and he reflected this interest in his series of somewhat allegorical* pictures, tending toward the classical, included Greek Lovers (1846, Metropolitan Museum of Art, New York City), Wages of War (1848), Judgment of Paris (1861, Corcoran Gallery of Art, Washington, D.C.), and Birth of Our Flag (1874). The majority of his work included portraits, and he left behind more than 250 as well as some figure paintings. Many of his portraits are cabinet* size.