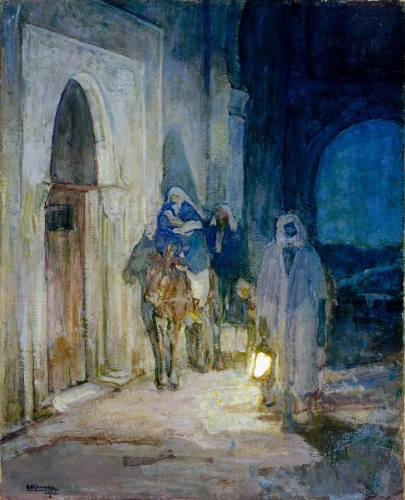 America’s first internationally renowned African-American artist, Henry Ossawa Tanner was born in Pittsburgh to a well-educated and devoutly religious family. When Henry was age 13, his father, the Reverend Benjamin Tucker Tanner, moved the family to Philadelphia. With the support of his parents and inspiration from the art of the 1876 Philadelphia Exposition, he enrolled in the Pennsylvania Academy to study with Thomas Eakins who became a close friend.

Tanner briefly painted animals and was determined to become the “American Landseer” in response to the demand for animal portraits. Between 1886 and 1887 Tanner was an illustrator for Harper Brothers, a publishing firm willing to advance black artists and writers. He then moved to Atlanta, Georgia, where he briefly and unsuccessfully ran a photography studio, but by 1891 he turned back to painting and sailed for France.

In Paris he studied at the Julian Academy with Benjamin Constant and J.P. Laurens. He received many honors and was considered a ‘strong man’ at Julian’s before his first Salon picture. He traveled to celebrated locations as Pont-Aven, but remained relatively unswayed by contemporary art movements. Tanner discovered the Salons and their power to advance a painter’s career, both abroad and in America. The acceptance of his painting, The Banjo Lesson by the 1894 Salon marked both a “turning point in his career and a shift in emphasis in his choice of subject, for it was his first major exploration of the pathos of the black in society.”

He returned briefly to Philadelphia but decided Paris was his natural home. At first, he was highly successful with genre painting but switched to religious subjects in the mid-1890′s and traveled extensively in the Near East to absorb Biblical references.

In 1899, Tanner married Jessie Macauley Olssen, a white Californian, and decided to make France his home for the remainder of his life. He feared that Americans would not be accepting of an interracial marriage. In 1908, he wrote of France, “There is a breadth, a generosity, an obsolete cosmopolitanism about her recognition of the fine arts, which bars no nationality, no race, no school, or variation of artistic method.”

Sources include:
Antiques Magazine
Peter Falk, Who Was Who in American Art