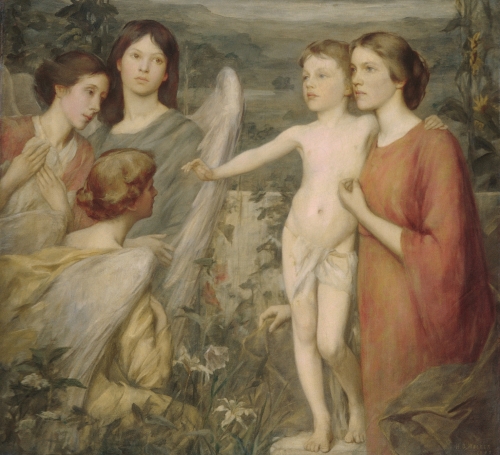 Henry Oliver Walker, a Boston-born artist of the Ecole des Beaux-Arts tradition, earned a distinguished reputation as a portrait and mural painter. His murals, commissioned for numerous public buildings, were allegorical. Many of these frescos had figures infused with idealism and sensual virtue.

As a child, Walker attended school near Beacon Hill in Boston. He did not begin his art career until he was age 36 because he had done secretarial work in New York at the offices of Day, Dana & Company to support a sister who needed financial help. However, when she died young and his parents did not need help, he declined an offer to become private secretary for a Mr. Rogers, who was a partner of J.P. Morgan, and followed his dream of becoming an artist. In the late 1870s, he took his money and went to Paris where he became a student of Leon Bonnat.

In Paris, he met artists with whom he would later spend much time in Cornish, New Hampshire: Augustus Saint-Gaudens, Thomas Dewing, Charles Platt, Dennis Bunker, and Willard Metcalf. Describing Walker in a letter to his parents, Platt wrote that Walker was “the kind of man that Henry James writes about as peculiar to Boston.” (Colby, 418) During that time, Walker, accompanied by painter H. Siddons Mowbray, toured Spain where they copied Old Master paintings. In 1880, Walker exhibited a painting, Le Philtre, at the Paris Salon.

Walker returned to the United States in 1882 where eventually he championed the aesthetic movement emphasizing art for arts sake. However, his early works were portraits and small genre paintings. He first went to Boston where he established a studio on Somerset Street, and became part of the art community including membership in The Tavern and St. Botolph Clubs. He also began socializing with many well connected business persons. In 1887, he spent time at Newburypoint, where he, Charles Platt and Dennis Bunker boarded together so they could paint a picturesque location known as Curson’s Mill. There he met Laura Marquand, age 30, whose family owned the Mill. She, from a prominent Boston family, was a painter, photographer and fabric artist who had studied at the Boston Museum with William Morris Hunt.

In April 1888, the couple married at her widowed father’s home in New York on 49th Street. Dennis Bunker was the best man, and guests included William Merritt Chase, the Saint Gaudens, Thomas and Maria Dewing and the Mowbrays. Maria Dewing had also been a painting teacher of the bride.

During their early years together, the couple lived in New York City and became active socially with other artists. Giving each other space to be somewhat independent, Laura continued with her art projects and poetry writing, and Henry worked intensely on his painting. He was elected to the Century Club and briefly joined the Players Club, a theatrical group. He also belonged to elected memberships of the American Academy, the National Academy of Design, and the National Society of Mural Painters.

In 1893, he received a medal at the Columbia Exposition in Chicago, and the next year won the Julia A. Shaw Prize from the National Academy of Design for his painting, The Singers. Other recognition included the William A. Clark Award from the 1895 Corcoran Gallery Exhibition; a 1902 Gold Medal from the Charleston, South Carolina Expo; and a silver medal at the 1904 Saint Louis Exposition.

The summer of 1888 was the first of many months’ residencies that the couple had in Cornish, New Hampshire and set a pattern until his death in 1929, of living part of the year in Cornish and part in their winter home, first in New York City and later in Belmont, Massachusetts. The Doll and Richards Gallery of Boston represented Henry Walker’s paintings.

The first visit to Cornish was at the invitation of Thomas Dewing, who made arrangements for the Walkers to stay at the home of Augusta and Augustus Saint-Gaudens, who were in Europe. Subsequently the Walkers, much attracted to the geographical beauty of the White Mountains including Mt. Ascutney and the intellectual climate of the Cornish Colony, built a home near the Charles Platt, who designed their house. They became very active in the community life of the Colony. Laura started the Mothers’ and Daughters’ Club, which brought the women together for socializing, intellectual discussion and good works including the start of a rug-making industry to employ local women. Henry Walker, working first from a home studio and then one from an adjacent building, painted portraits of local persons including Platt and did some landscape painting. His studios were also large enough to accommodate the mural painting for which he became best known.

During their marriage, the couple had two sons, Marq and Oliver. Widowed, Laura, sold the Cornish Colony home to the Platt family in 1936. She died in 1951.

Walker’s murals can be viewed in buildings throughout the country; John Eliot Preaching to Indians and The Pilgrims on the Mayflower are in the Massachusetts State House, The Wisdom of the Law is in the Appellate Court House in New York City, and Yesterday, Today and Tomorrow is in the Minnesota state capitol building.

His most famous murals, completed in 1897, were done for the corridor of the Library of Congress. Of the artist, a writer in Harpers Weekly wrote: “He has added to the library perhaps the most thoroughly exquisite paintings there.” (Colby, 420)

Sources:
Laura Marquand Walker, Beyond A Gilded Cage
Virginia Reed Colby and James B. Atkinson, Footprints of the Past