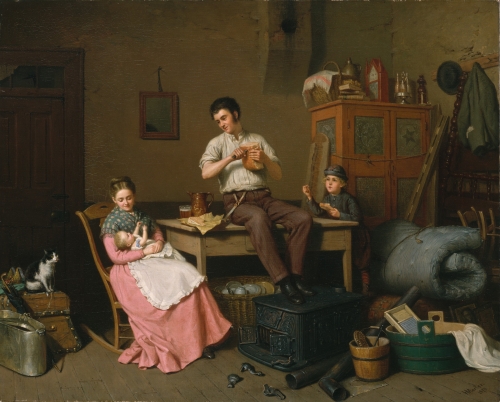 Born in New York City, Henry Mosler became a well-known illustrator and painter of portraits and genre scenes. His parents were Jewish immigrants, and he moved with them to Cincinnati in 1851. He studied there with James Beard; in Dusseldorf with H. Mucke and A. Kindler from 1863 to 1865; in Paris with E. Hebert; and in Munich with Karl von Piloty.

He first earned recognition in the early 1860s as an illustrator during the Civil War for Harper’s Weekly. After that he went to Europe for art study and returned in 1866 to Cincinnati where he became a successful portraitist. In 1874, he returned to Munich and in 1877, established a studio in Paris where he became famous for his peasant genre scenes of Brittany and Normandy. His narrative work, The Return, exhibited at the Paris Salon of 1879, was the first painting by an American purchased by the French government. In 1894, he moved to New York City.

He exhibited extensively including at the National Academy of Design in New York, the Royal Academy in Munich, and the Pennsylvania Academy of the Fine Arts.

Source:
Who Was Who in American Art by Peter Hastings Falk (editor)