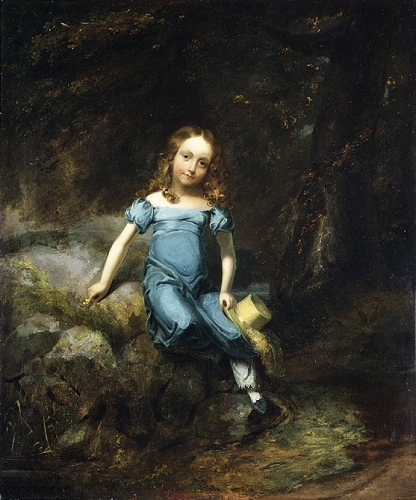 Born in Utica, New York, Henry Inman became the leading portrait painter of his time and was a noted chronicler of the history of the West without having been there. He also painted idyllic landscapes, and some popular genre paintings that were engraved in books. He became the first vice-president of the National Academy of Design, and most of his short life was spent in New York City.

For seven years, he was apprenticed to portraitist John Wesley Jarvis, and they worked in tandem with Jarvis painting the likeness and Inman finishing the canvas. On a visit to New Orleans in 1820 and 1821, they made $6000.00 from completing six portraits.

In the mid to late 1820s, Inman married Jane Riker O’Brien and established his own studio in New York City, and from 1826 to 1828, worked in partnership with his pupil Thomas Cummings. He received commissions to paint prominent New Yorkers including the De Kays and Drake families and in 1830 completed a full-length portrait of Governor Martin Van Buren, which is in the City Hall of New York City and the first of six city hall commissions, was exhibited in the Academy of Design that same year. Inman also became a genre, figure and landscape painter including James Henry Hackett as Rip Van Winkle and Washington’s Tomb at Mount Vernon.

In 1831, Inman moved for three years from New York to Philadelphia, where he was a partner in a lithography firm and purchased a home in nearby Mount Holly, New Jersey. He met Thomas L McKenney, a newspaper editor who was compiling a history of North American Indian tribes. He hired Inman to make careful copies of Indian portraits, most of them originally by Charles Bird King. By late 1833, Inman had completed more than 75 copies, remarkably true to King’s originals. It was fortunate that this second set of portraits was produced because the original Indian Gallery of McKenney burned in a Smithsonian fire in 1865.

Returning to New York City, he resumed his portrait painting career and also took students including Daniel Huntington, Thomas Boyle and Edward Mooney. In 1837, Inman received one of four much-sought after commissions to do a large American-history themed painting for the Rotunda of the U.S. Capitol Building. His subject was The Emigration of Daniel Boone to Kentucky. However, his failing health prevented him from finishing the project, and Congress awarded the commission to William Powell of Ohio, who changed the theme to De Soto’s Discovery of the Mississippi River.

In the mid 1840s, Inman, struggling to restore his health, went to England and completed portraits of distinguished Britons including poet William Wordsworth and historian Thomas Macaulay. Inman died of asthma and enlarged heart in 1846, shortly after his return from England, and shortly after an exhibition was held in New York to raise money for his impoverished family.

Sources:
David Dearinger, Editor, Paintings and Sculpture in the Collection of the National Academy of Design, 1826-1925
Peter Hastings Falk, Editor, Who Was Who in American Art