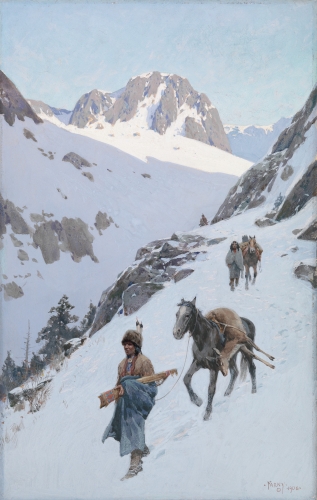 Born in Alsace Lorraine, France, Henry Farny became a well-known American illustrator and painter, especially for quiet aspects of Indian life such as campfire scenes. Farny, working in a highly realistic, detailed style, had a deep regard for Indians as individuals, and often depicted them in an harmonious environment. Only a few of his paintings show Indians in dramatic action. He particularly painted the Sioux Indians and, given the Indian name for “Long Boots”, was adopted into their tribe.

His work reflected the late 19th and early turn-of-the century romanticizing of the American Indian in the West, but differed from the approach of Charles Russell and Frederic Remington who showed conflict between Indians and Whites. Farny’s primary theme was Indians living in peace amongst themselves during a period when their culture was dying out. “He neither glorified nor denigrated it. . . .Because of his patient observation of the Indian way of life, much has been preserved which might otherwise have been lost.” (Zellman 418)

His most prolific period was between 1890 and 1906, and most of his paintings were small in size, and finely finished. His primary medium was gouache, although he also worked in watercolor, oil, and ink and did an occasional bronze sculpture. In addition to his artwork of western subjects, he was the illustrator of McGuffey readers, the school textbooks that were standard in the public schools in the late 19th century.

As an adult in the prime of his career, he was a large man physically, over six feet tall, “broad shouldered, bulky in the waistline, an inveterate storyteller, renowned as an after-dinner speaker, a man with innumerable friends, alive with interest in life.” (Taft 217). Among his close friends were General Ulysses S. Grant, President Theodore Roosevelt and General Nelson Miles, and abroad he was recognized in 1889 with a medal at the Paris exhibition of 1889 for one of his Indian subjects.

Farny was the son of a political activist from France who, as a Republican, fled when Napoleon came to power. At age 5, he settled with his family in the pine forests of western Pennsylvania at the headwaters of the Allegheny River, and lived closely and on friendly terms with the Seneca Indians. In 1859, he and his family, traveling by raft down the river, moved to Cincinnati, Ohio, where Farny studied and did lithography including Civil War views that could be sold. By the time he was eighteen, a two-page spread of Cincinnati by him was published in Harper’s Weekly.

He lived in New York City for a short time in 1867, and earned illustration commissions from Harper’s Weekly. He decided he needed more art education, and from 1867 to 1870, studied in Europe, at one time sharing a studio in Munich with John Twachtman and Frank Duveneck, who remained a life-long friend. He was also in Rome, Vienna, and Dusseldorf and to support himself, did many odd jobs for hire.

In 1873, he returned to Europe, where at the Vienna Exposition he exhibited a 90-foot long cartoon, which he had created as a commission entry by the Cincinnati Chamber of Commerce.

He returned to illustration in Cincinnati, working for Cincinnati publishers and for Harper’s Weekly and The Century, and from Cincinnati traveled widely in the West, making his first trip in 1888, traveling over a thousand miles by canoe on the Missouri River. His interest had been piqued in 1881 with the news that Sitting Bull had surrendered at Fort Buford in Sioux Territory on July 19, having wandered with tribesmen since 1876 when the Indians had defeated General Custer at the Battle of the Little Bighorn in South Dakota. Farny, hoping to see and talk to Sitting Bull, traveled to the Sioux agency at Standing Rock where the Indian Chief was first confined. However, by the time he arrived, Sitting Bull had been transferred to Fort Randall, but Farny found a wealth of Indian material for his sketches and subsequent paintings. His decision to focus on Indian subjects was made. He said: The plains, the buttes, the whole country and its people are fuller of material for the artist than any country in Europe.” (Taft 219)

In 1883, he journeyed to Montana with the Northern Pacific Railroad on the excursion sponsored by Henry Villard, President of the Railroad. The group with many dignitaries departed from St. Paul and as part of the trip witnessed the ceremony of the completion of the transcontinental line and the joining of the railway extensions near Missoula. The celebration included the cornerstone commemoration of the territorial capital of Bismarck, and at this event, Farny finally got to meet Sitting Bull, who came with a group of Indians from the Standing Rock Agency sixty miles away. Farny introduced Sitting Bull to General Ulysses Grant, and “the two eyed each other with respectful wonder.” (Taft 221). Both gave speeches with Sitting Bull using an interpreter. After Bismarck, the group visited the Crow Reservation at Grey Cliff, Montana, and Farny made sketches which he converted into illustrations for Harper’s Weekly.

In 1884, Farny along with writer Eugene Smalley went back to Montana on assignment for The Century Magazine. They were hosted by a group of notables including the governor and then took a voyage down the Missouri River from Helena to Great Falls to Fort Benton—all depicted by Farny in the magazine article by Smalley. From Fort Benton, they took a 200 mile stagecoach ride to connect with the railroad at Billings.

It is possible but unverified that Farny made other trips west to Indian territory, and there are sketches from the late 1880s indicating he went to California, but the details are unknown.

Farny also did numerous Indian portraits for The Century Magazine to accompany a series written by Frank Cushing about his life among the Zuni of New Mexico when he was on assignment from the Smithsonian Institution. For these illustrations, Farny visited Cushing in Washington rather than in New Mexico because Cushing had brought about six Zuni head men with him to the nation’s capital.

In 1894, he traveled with General Miles to Fort Sill, Oklahoma where Apaches with Geronimo, Kiowa and Comanche Indians were on reservation. Farny did a portrait sketch of Geronimo, which the Indian chief signed.

After 1890, Farny discontinued illustration for popular magazines, and concentrated on easel painting, using for props the many items he had collected from his western travels. “The accuracy and artist of his work combine to make him one of our major painters of the Old West.” (Reed 54) The first painting he finished after his initial trip West was Toilers of the Plains, depicting two squaws gathering firewood while their overseer walked with dignity and free of burden. He also did a painting for the Paris Salon, The Sioux Women of the Burnt Plains, which stirred positive comment from Oscar Wilde, who was lecturing in Cincinnati.

The total number of Farny’s western paintings is unknown. The Cincinnati Museum in 1943 held an exhibition of his work that included 39 oil paintings and 104 watercolors. At least twenty-four of the oils and seventy-one of the watercolors were Western. For many viewers, work by Farny is admired for its authenticity and its ability to convey so much factual data about a critical time in America history—the opening of the West.