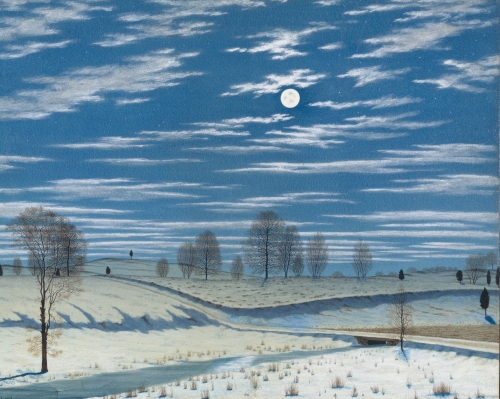 Born in London in 1843, Henry Farrer was the younger brother of Thomas Charles Farrer, who, along with William Trost Richards and a handful of others was a founding member in 1863 of the Association of Advancement of Truth in Art. The organization was based on the principles of Pre-Raphaelite* philosopher and artist John Ruskin, with whom Thomas Farrer had studied drawing at the Working Men’s College in London. In fact, the Farrer brothers became leading American ‘Ruskinians’, as part of the American Pre-Raphaelite movement of the 1860s, 70s and even 80s.

Thus, the Farrers are best remembered for their delicate watercolors and etchings, which reveal their Ruskinian attention to detail, close focus, and meticulous brushwork.

Little is known about Henry’s childhood or early training, but it is said that he was self-taught. At the age of nineteen he immigrated to the United States and opened a studio in New York City where he painted landscapes, predominantly in watercolor.

Henry Farrer was a founding member of the American Society of Painters in Water Color* (in 1866) and was secretary of that organization for many years. Farrer was also a founding member of the New York Etching Club* and became its President in 1881. Sometime around 1868 Henry built his own etching press and began his first attempts at etching by making precise topographical* views featuring scenes of New York buildings.