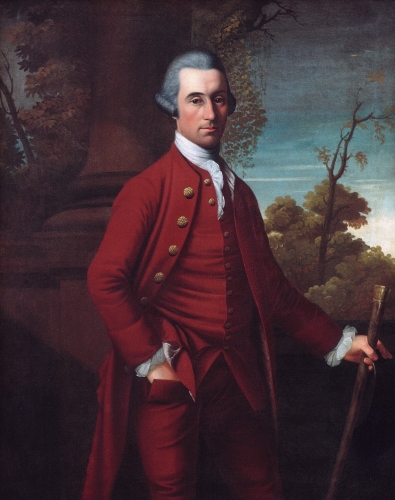 Born in Philadelphia, Henry Benbridge was a portrait and figure painter who is known for the naturalism of his subjects and especially the richness with which he depicted the fabric of their clothing.

He studied in Philadelphia with John Wollaston. At age 21, he inherited substantial money and studied for four years, 1765 to 1769, in Italy at a time when archaeological finds were generating much interest in classical antiquity. He associated with Christopher Hewetson, a successful Irish sculptor, and through him met some of the most prominent artists of the day. He was also friendly with Anton Raphael Mengs, a leading contemporary artist, and Pompeo Batoni, a favorite of the British.

He then went to London for a year and became associated with painter Benjamin West, a relative by marriage, and West was very helpful to him as was American statesman, Benjamin Franklin to whom he had a letter of introduction.

In 1770, he returned to Philadelphia where he married miniaturist Letitia Sage. For reasons unclear, they settled in Charleston, a move that may have resulted from distinguished southerners he had met at the American Philosophical Society such as John Deas and Ralph Izard.

In Charleston, Benbridge he succeeded Jeremiah Theus as the most prominent portraitist of distinguished local residents, especially persons with Philadelphia and London connections such as the Thomas Middleton family. He also did numerous miniatures.

When the British captured Charleston, Benbridge, a strong patriot, refused allegiance to them and was exiled to Saint Augustine, Florida for two years. He was released in 1783, and he returned to Charleston, where he again had many portrait commissions, this time among people who shared his political loyalties. After 1790, he did few paintings, likely because of ill health, but he did give lessons around 1800 to Thomas Sully, who was living in Norfolk, Virginia. Eventually Benbridge left Charleston, where there are few extant paintings of his during his years in the South.