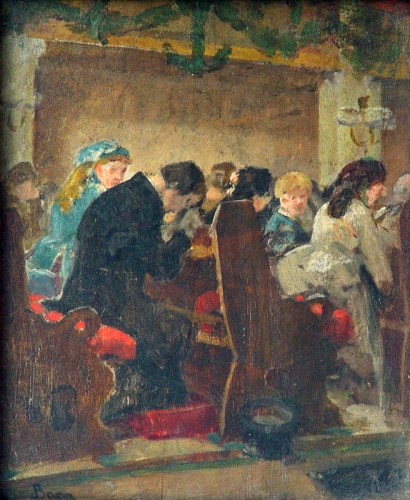 Study for Christmas Prayers, circa 1872

A figure painter in the tradition of the late 19th century French tradition, Henry Bacon is associated primarily with watercolors of scenes of Normandy and Egyptian. Many of his landscapes have figures, well drawn and often romanticized bucolic, peasant types.

He was also one of the first Americans to be admitted to the Ecole des Beaux-Arts in Paris and became a promoter of the use of watercolor in pure washes, without opaque coloration. He also showed his genius for Impressionist effects of weather and light, particularly on reflective surfaces such as water.

Not much is known from his early life except that he was born in Haverhill, Massachusetts, and enlisted in the United States Army to serve in the Civil War where he was also a field artist for Leslie’s Weekly.

Wounded quite severely, he left the War in 1864 and went to Paris with his wife Lizzie. He studied under Alexandre Cabanel and in 1866, Edouard Frere took Bacon on as his student. From these men, both conservative academics, Bacon learned to paint in oils with a highly smooth finish with softly outlined figures and rich colors. But in 1895, he turned almost exclusively to watercolor for which he earned much acclaim.

In Ecouen, Bacon and Frere painted many scenes of the French countryside together. In his lucid and virtuoso watercolors, Bacon showed his stylistic affinities to Winslow Homer and Pierre-Auguste Renoir. For many years, he exhibited paintings at the salons of Paris and at the National Academy of Design of which he was a member.

His paintings are amongst the holdings of major museums across the U.S., including Bostons Museum of Fine Arts., 11 Bacons in the Smithsonian American Art Museum.