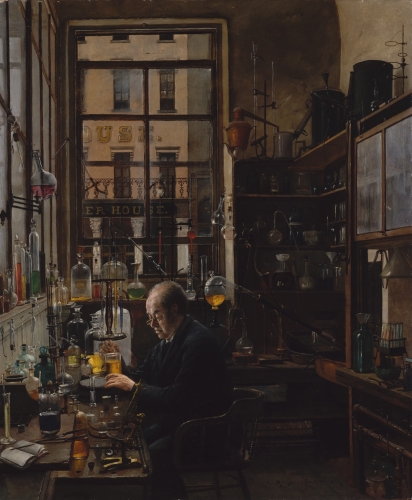 Born in San Francisco to a pioneer California family, Henry Alexander was a decorative painter of still life and rich interiors and a minor late 19th-century figure in San Francisco and New York City at the turn of the nineteenth century.

Although some of his paintings were trompe l’oeil still lifes, his most noted paintings were filled with detailed renderings of interiors with people using various kinds and sizes and shapes of equipment–all painted very realistically. Often the central figure is bearded and is playing chess in a cluttered office with all sorts of objects on shelves. He is especially remembered for his laboratory paintings of California mineralogist Thomas Price and the infinite shapes and colors of the contents of his setting.

At age 14, Alexander studied in Munich with Wilhelm Lindenschmit and Ludwig Loeffitz, and then returned to San Francisco until 1887 when he moved to New York City and occupied a studio in the famous Tenth Street Studios. There, discouraged by the lack of response to his art work, he at age 34 committed suicide with a dose of carbolic acid.

In 1906, his family arranged a memorial exhibition of his work, which as a body was destroyed in the earthquake and fire. There are few remaining paintings, but he does have work in the Berkeley Art Museum, the Metropolitan Museum of Art and the Oakland Museum.