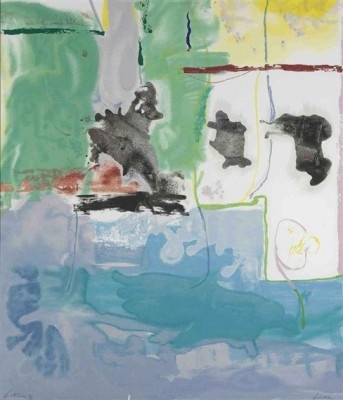 Helen Frankenthaler was born in New York City on December 28, 1928. She was the third and youngest daughter of a noted justice of the New York Supreme Court and his German born wife. She attended the exclusive Brearley School in Manhattan and the Dalton School where her art teacher was Rufino Tamayo. He suggested that she go to Bennington College to study painting; her instructor there was Paul Feeley, an academic Cubist. Helen Frankenthaler graduated from Bennington College in 1949 and studied with Hans Hofmann in Provincetown, Massachusetts in the summer of 1950.

In her early days as an artist, Helen Frankenthaler shared a Greenwich Village studio and its rent with Friedel Dzubas, whom she had met at the home of the critic Clement Greenberg. Her circle of friends included Larry Rivers, Grace Hartigan and Joan Mitchell. In April 1958, Helen Frankenthaler married the leading Abstract Expressionist painter Robert Motherwell. Their honeymoon was spent traveling in France and Spain and they returned to a brownstone in New York. Their marriage ended in divorce in 1970.

When Jackson Pollock first exhibited some of his paintings in 1951, they exerted a great influence on Helen Frankenthaler. Their scale, free graphic rhythms and color impressed her strongly; but above all she was struck by Pollock’s method of dripping paint directly onto the raw canvas, emphasizing both the flatness of the painting and the physical actuality of the support.

Carrying this technique still further, Helen Frankenthaler thins her pigment with large amounts of turpentine so that they soak directly through the unprimed cloth and stains it. The resultant image no longer lies on top of the picture plane but is embedded within; the transparent mat colors of varying intensity modulate from light to dark without creating any illusion that they exist in a space other than that of the woven textural surface. Helen Frankenthaler also adopted Pollock’s practice of painting with the canvas stretched out on the floor, allowing the artist to be “in” the picture, work from all four sides, and produce an image seen from above. She has always delighted in the way paint behaves on paper. The freshness, directness and potency added to her dramatic use of color, line and space.

In the early 1960′s, Helen Frankenthaler switched from oils to acrylics, with which she could achieve a watercolor effect by thinning the paint even further. She experimented with the use of sponges, heavier brushes, thicker globs of paint, etc. Helen Frankenthaler influenced a whole generation of color-field painters, including Kenneth Noland and Morris Louis.

Helen Frankenthaler passed away after a long illness on December 27, 2011 at her home in Darien, Connecticut.