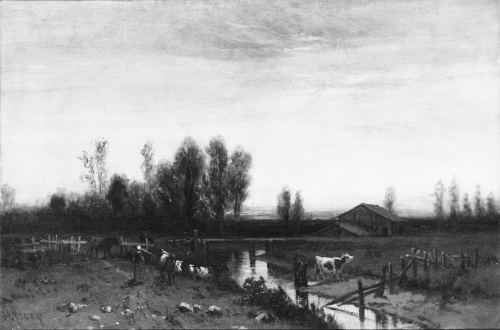 Born in Lyndon, Vermont, Harvey Young became one of Colorado’s leading 19th-century artists, known for his Rocky Mountain landscapes and mining scenes in oil and watercolor.

Young attended St. Johnsbury Academy in Vermont, and in 1859 went to California, via Panama, to prospect for gold and pursue painting. He established a studio in San Francisco where he earned an excellent reputation.

After serving in the Civil War, he returned to California in 1866 and established a studio. Between 1869 and 1879, he made six trips to Europe to further his art study, which included classes in Paris at the Academie Julian and private classes with Carolus Duran as well as academic training in Munich. In 1878, his work was exhibited at the Paris Salon.

He also retained his ties to the American West. In the early 1870s, he went with his wife and children on the railroad’s first cross-continental train trip to California. By 1879, he determined to mine for silver in Colorado, and earning a fortune from mining, he abandoned painting for many years. However, he lost the money during the Panic of 1893, and he returned to painting, focusing especially on scenes along the Denver and Rio Grande Railroad. Later Railroad personnel loaned him the use of a private studio car in which he traveled and painted advertising literature for the railroad.

For his painting, he had a special formula that combined oil and watercolor, and then he covered the paintings with a varnish that he invented after years of experimentation.

His travels also took him often to southern Arizona between 1889 and 1894. There, traveling by burro, he did many sketches including drawings of Tucson in the winter of 1890, although he was much more focused on business matters than his art talents.

Young was in Denver in 1893 and was a charter member of the Artists Club formed in December of that year for the purpose of “advancing the Art interests of Denver.” The Club consisted of members who were themselves artists, including Emma Richardson Cherry, Charles Partridge Adams, and Charles M. Carter. The organization later made it their mission to purchase art work for a collection to be housed in their art museum, a building that did not materialize until 1922 when the Chappell family gifted the group, now called the Denver Art Association, the family’s home. The Chappell House was immediately renamed the Denver Art Museum and has evolved into one of Denver’s premier cultural agencies, which is currently housed in distinctive architectural structures designed by Geo Ponti and Daniel Liebeskind.

His work is in the collection of the Oakland Museum, the Denver Art Museum, the Copley Library in La Jolla, California, Colorado College in Colorado Springs, and the Colorado Historical Society (untitled 1891 gouache/oil on paper).

Because of confusion in his family records, he is sometimes mistakenly listed as Harvey B. Young.