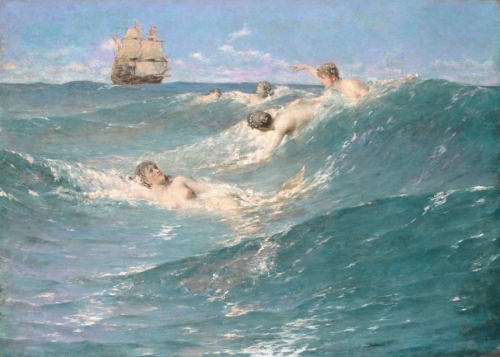 George Willoughby Maynard (1843-1923), portrait and mural painter, was born in Washington, D.C. He arrived in New York City in 1866 to begin drawing lessons with sculptor Henry Kirke Brown, and the next year began two years of study at the National Academy of Design*. In 1869, he left for Europe, traveling with his teacher Edwin D. White.

Maynard enrolled in the Royal Academy of Antwerp* as a student of Joseph van Lerius. Among his classmates was Frances Millet, with whom he traveled in 1873 to Greece, Turkey and the Black Sea region. He was in Rome the winter of 1873-1874, and then returned to live in New York City, but shortly after he went to Boston to help John LaFarge with the mural decorations of Trinity Church. Then, stirred by interest in becoming more proficient with murals, he returned to Europe to “make a study of decorative painting practices,” which included study in Paris in 1877-1878.

Returning to the United States, he did not immediately receive mural commissions, but gradually this work came to him including murals for the Agricultural Building at the 1893 Chicago World’s Fair*; Library of Congress in Washington DC; Ponce de Leon Hotel in Saint Augustine, Florida; and the Plaza and Waldorf Hotels in New York City.

Maynard also became noted for his portraiture, and in 1880 was elected to the Society of American Artists*, an organization critical of the National Academy of Design for being too conservative. His 1888 entry, Civilization, for the Society’s exhibition was an allegorical* figural work, which was regarded as being of such excellence that it was featured in a place of honor. It was described as being typical of Maynard’s allegorical works in that “the figure of Civilization and her throne occupy a space that hovers ambiguously between two and three dimensionality.” However, some Society persons were critical. They “questioned the clarity of the allegory and the appropriateness of having a young innocent-appearing girl serve as a model for the complex notion of civilization.” Others disliked the paintings “austere lack of color and its drapery textures, alternately called ‘porcelaneous’ and ‘chalky’ ” (385)

Maynard, however, had a long affiliation with the National Academy of Design, beginning to serve as a professor there in 1889 for a year as a replacement for Lemuel Wilmarth. From that time for the remainder of his life, he had regular Academy teaching assignments and long-term service on the Governing Council. In 1894, he turned down the nomination of Vice President. In the early 20th century for the Academy, he did restoration work on the collection, served as librarian, and prepared a catalogue for the Academy holdings. He gave much of his own collection to the Academy as well as work by Augustus Saint-Gaudens. His funeral service in 1923 was held at the Academy.