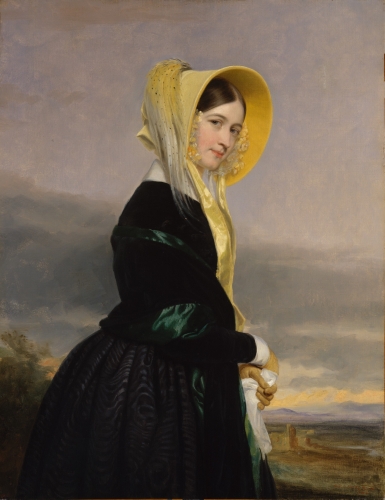 Born and raised in Boston to impoverished parents, George Healy was one of the best-known portrait painters of the mid to late 19th century. He also did occasional genre and historical subjects.

His painting talent was recognized by society sitters and specifically by the renowned portraitist Thomas Sully. Portrait subjects included the last-known portrait of a clean-shaven Abraham Lincoln as well as Daniel Webster, Franz Liszt, Louisa May Alcott and Henry Wadsworth Longfellow.

At age 17, Healy opened a portrait studio, and one of his early patrons was Mrs. Harrison Gray Otis. At age 21 in 1834, Healy, supported by Sully and Otis, left for the first of many trips to Paris where he studied with Antoine Jean-Gros and with Thomas Couture, who became a close friend. He was in Paris for many years as a court portrait painter and gained an international reputation. He spent the remainder of his life traveling between the United States and Europe, making 35 Atlantic Ocean crossings.

In 1855, he established a home in Chicago from which he frequently traveled to the East Coast and the South to paint portraits of leading politicians and aristocrats, completing about 100 of them a year. After the Civil War, he returned to Europe for 25 years but left at age 79 because of his disdain for the new turns of the Parisian art scene that included Impressionism.