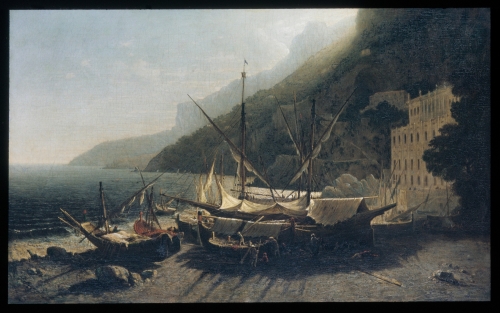 Nicknamed “Claude” Brown for the French landscape painter Claude Lorraine whom he admired, Brown was among the most celebrated of American painters living abroad in the 19th century.

He was born in Boston, and decided as a youngster to make a living as an artist. He apprenticed to a wood engraver, Abel Bowen, and then illustrated children’s books. A friend, noting his talent for landscape painting, encouraged him to devote himself to that subject, and the purchase of one of these by a wealthy Boston merchant allowed Brown to go to Europe in 1832.

He began his artistic career as an apprentice to Abel Bowen, and received further training from Eugene Isabey in Paris during his first trip to Europe in 1832-33.

On his return to Boston, Brown was inspired and encouraged by the aging Washington Allston, a painter of Romanticism. Brown exhibited frequently at the Boston Athenaeum. In 1839-40 he returned to Europe and settled in Italy, making a comfortable living for nearly twenty years by painting Italian landscapes to sell to American and European tourists.

In 1859, Brown returned to the United States, and in the 1860s and 1870s made many sketching trips to the White Mountains. Perhaps Brown’s greatest New Hampshire scene was The Crown of New England, a huge panoramic view of Mount Washington, which was purchased by the Prince of Wales in 1861 (now unlocated, but a smaller version is in the Dartmouth College Art Galleries).

He primarily painted Italian scenes in later life, responding to the public’s preference for his European views. Returning to America, he continued his theme of Italian scenery and also did eastern landscapes. He used precise brushstrokes and relatively thick paint and introduced from Europe a method known as “Macchiorelli,” an impressionist style of painting in patches of color to emphasize the effects of light and dark.

Brown exhibited at the Boston Athenaeum, the Brooklyn Art Association, the Pennsylvania Academy of Fine Arts, and the National Academy of Design.

He died in Malden, Massachusetts.