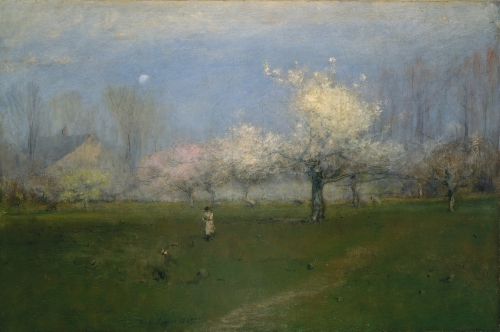 Born on a farm near Newburgh, New York, George Inness had post-Civil War recognition for paintings that were unique in structure and atmosphere and that turned away from the dramatic, panoramic Hudson River School of painting to a quieter, tonalist expression of poetry in nature. Among the Americans at Barbizon, France, he was the leading painter of that movement of early plein-air landscape painters.

He spent his youth in Newark, New Jersey. His father, trying to discourage his obvious art talent, gave him at age 14 a grocery store to run. But in 1841, at age 16, George left for New York and worked for a map engraver. Impatient with supervision, he started to paint alone and exhibited with the National Academy in 1844. He studied briefly in Brooklyn with Regis Gignoux,a French academic painter, and then went to Europe, something he continued to do often including two trips to Italy and France in the 1850s that much influenced his work.

In 1868, he was elected to the National Academy of Design in New York, and in 1891, was in Northern California where he shared a studio with William Keith and painted with him in Yosemite and Monterey. He and Keith also shared a commitment to the philosophy of Swedenborg. In 1892 and 1893, Inness and his wife traveled in Florida where he painted numerous landscapes.

His painting technique was elaborate. He swiftly stained the surfaces of his canvases, and then sketched on them with charcoal and umber, a process that sometimes took more than a week. He used opaque paint to bring out light and texture and then used glaze to tone it down. The overall result were landscapes that combined tonalism and luminism, great contrast of light and dark.

Much of his life he was poor, and he also had chronic bouts of epilepsy, but in the later part of his life and posthumously, he earned a reputation as one of America’s most talented painters.