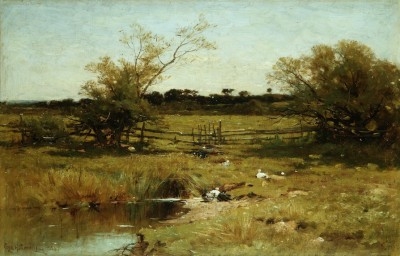 The son of a printmaker who engraved Hudson River School landscapes, George Smillie became a painter of traditional 19th-century landscapes in the Hudson River style.

He trained in engraving with his father, James Smillie, and then was a painting pupil of James McDougal Hart. From 1862 to 1900, he exhibited at the National Academy of Design and was elected to membership in the Academy in 1882, and in 1892 became Secretary.

He spent most of his professional life in New York City, but he and his brother, James David Smillie, traveled West to the Rocky Mountains and Yosemite Valley in 1870. Two years later, he went to Europe, which resulted in a more forceful style and lightened palette. He also traveled in the Adirondacks and the White Mountains of New Hampshire. Late in his career, he adopted the Impressionist style.

In 1881, he married Nellie Sheldon Jacobs, a pupil of his brother’s, and the three of them shared a studio. He was introverted, and after the death of James in 1909, he lived as a solitary artist in Bronxville.

Source:
Peter Falk, Who Was Who in American Art