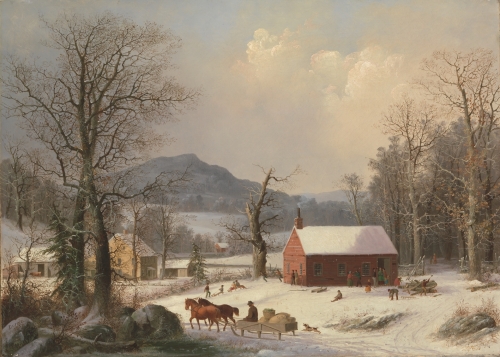 orn in Hartford, Connecticut, George Durrie was known as the “snowman” because of the many winter scenes he painted. He lived most of his life in New Haven and earned a reputation for rural landscape scenes, especially snow scenes, which he introduced as subject matter in American painting. His paintings “provide an excellent record of rural life in the mid-nineteenth century . . . and his carefully recorded details of nature and foliage added authenticity to his depictions.” (Reed 15).

He began the study of art in New Haven in 1839 with portraitist Nathaniel Jocelyn, and traveled about the Connecticut and New Jersey countryside filling commissions. He also painted still lifes, genre, and scenes from Shakespeare.

He is credited with making the discovery that farm landscape scenes are more appealing when they appear to be covered with snow, hence the introduction of the “snowscene” into American painting. His paintings emphasized bleak, snowy wintry scenes of New England.

At the same time, he was creating snowscenes in the 1860s, Currier and Ives were marketing hand-colored lithographs, and his landscapes matched their formula for pleasant, quiet country motifs. These works brought both him and Currier and Ives much success, and after his death in 1863, they continued to use his paintings for lithographs. Among his most popular prints were Cider Making, Winter in the Country, Getting Ice and Winter Morning.

Many viewers found his paintings comforting but others found them unimaginative and cloyingly nostalgic.