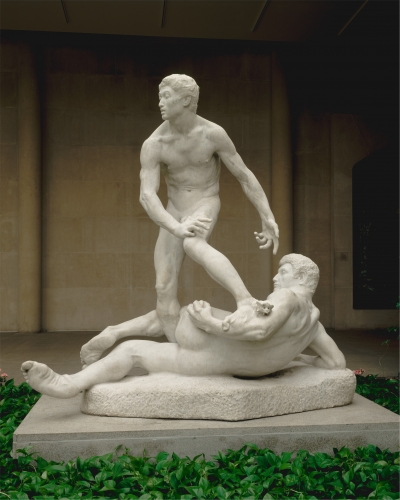 The Struggle of the Two Natures in Man, 1888

Credited with much originality for breaking away from the prevalent Beaux Arts tradition of idealized sculpture with themes removed from daily life, George Grey Barnard created highly personalized, expressive figure work influenced in style by Rodin and Michelangelo. He devoted his career to work that spoke of basic human motivations, primitive instincts, and psychological complexities.

Much of his early sculpture is in an Impressionist style, but his later figures are more smoothly stylized and simplified in a somewhat abstract manner. One of his most famous sculptures is The Struggle of the Two Natures of Man, which depicts over life-size nude male figures, one lying down and the other standing on him. He carved the work carved from a single block of marble, and the finished piece symbolizes a young man casting off his former life to reach out to the greater universe.

Barnard was from Bellefonte, Pennsylvania, and grew up in the Middle West. He attended classes at the Art Institute of Chicago and in 1883 went to Paris where he studied at the Ecole des Beaux Arts and won the patronage of Alfred Corning Clark who commissioned his earliest works including The Struggle of the Two Natures of Man, based on a quote from Victor Hugo, which, translated into English read, “I feel two natures within me.” This piece made his reputation when shown in 1894 at the Paris Salon and praise was given by Auguste Rodin as well as critics. From that point, he was a celebrity in Europe and the United States.

The most important commission of his career was decorations for the Pennsylvania State Capitol at Harrisburg. He did the work in France between 1904 and 1910, and it was a panorama of allegorical figures representing virtues and vices. The unveiling was October 4, 1911 on what the state named “Barnard Day,” and he was awarded a large sum of money for the work.

He was also a teacher of the direct-carving method at the Art Students League in New York, and an art collector of French antiquities. His collection became the basis of the Cloisters, a New York City museum devoted to medieval collections.