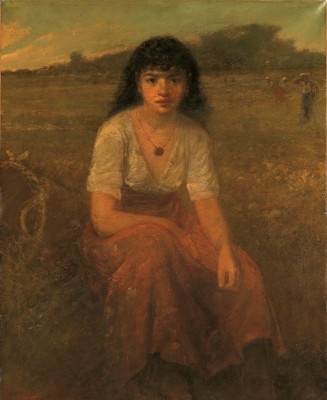 From a poor farming family in Deerfield, Massachusetts, George Fuller worked a variety of jobs while showing much talent as a portrait painter. He became interested in painting in 1841, when he accompanied his deaf-mute younger brother, Augustus Fuller (1812-1873) on a painting trip through western New York.

Pursuing this new interest, he studied in the Albany studio of sculptor Henry Kirke Brown from 1841 to 1842, and then enrolled for two winters at the Boston Artists’ Association while farming during the summers. He also studied with his aunt, Carolyn Negus, in Boston where he shared a studio with a cousin, Jonas Holland Howe.

In 1847, Fuller moved to New York City where he enrolled at the National Academy of Design and lived primarily for the next decade. He also traveled to Philadelphia, Mobile and Montgomery doing portraits.

From 1860, after a brief tour of Europe where he studied Old Master paintings, he operated the family farm for fifteen years at Deerfield, Massachusetts, and occasionally painted landscapes. But the farm failed, and he established himself in Boston as a successful painter of portraits and landscapes.

He had his first exhibition in Boston in 1875, and was praised for his Barbizon-style, brown-toned landscapes.