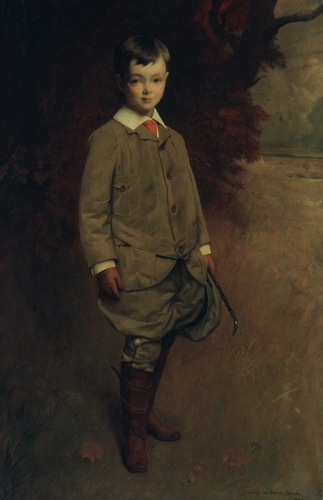 Raised in Danbury, Connecticut, George de Forest Brush became a figure and portrait painter, especially of Plains Indian subjects whose tribal customs and traditions he depicted in a romantic style. Unlike his peers, Frederic Remington and Charles Russell, he was not interested in dramatic scenes but painted daily life, which presented a new aspect of these people to eastern viewers. He also painted “modern madonnas” or straightforward portraits of women, often with his wife, Mittie, and his children as the models.

He enrolled at age 16 for three years, 1871 to 1874, at the National Academy of Design with Lemuel Wilmarth. In 1873, thanks to an anonymous benefactor, he enrolled, along with Abbott Thayer, at the Ecole des Beaux-Arts in Paris as a pupil of Jean-Leon Gerome, whose academic style, solidly constructed figures, and highly finished technique had continuing influence on Brush. Gerome had also encouraged his students to explore exotic subject matter, advice Brush certainly followed in his travels West depicting the Indians.

Returning to the United States in 1880, Brush traveled with his brother Alfred to Wyoming where he lived with the Shoshone and Arapahoe tribes and then to Montana for several years where he painted the Crow Indians. He contributed views of Indian life to “Harper’s” and “Century” magazines, and his images were of “the world of the Indian before the white man came, an idealized Indian that never was.” (Samuels 72).

Returning to the East, he took many Indian artifacts that he used in his New York studio to produce salon paintings of idealized depictions of Indian life. These paintings had limited appeal, so he supported his family by teaching at the Art Students League. Then he began mother and child paintings which brought him financial success. He and his family traveled in Europe, including Italy where he learned to paint his “American madonnas”, which ultimately brought him success. He and his wife then purchased a farm in Cornish, New Hampshire, where he had first visited in 1887. Upon their first arrival, the couple lived in a tepee, which burned down when Augustus Saint-Gaudens and others partied in it when the Brushes were absent.

In 1898, Brush developed the idea of camouflage for warshps.

He died in Hanover, New Hampshire in 1941, having had several exhibitions in New York in the 1930s.

Source:
Alma Gilbert, “The Cornish Colony”
Peggy and Harold Samuels, “Encyclopedia of Artists of the American West”
Peter Falk, “Who Was Who in American Art”