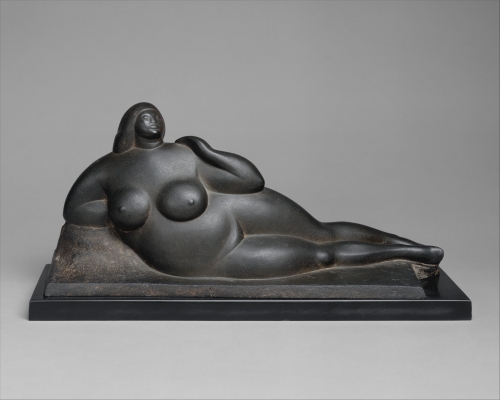 Gaston Lachaise was the son of a master cabinet-maker and wood carver with whom he trained. At age 13, he enrolled in the Bernard Palissy School to study sculpture and at age 16 in the Ecole des Beaux-Arts. He also worked for Rene Lalique of the famous glass making family.

In 1906, he arrived in Boston where he worked for Henry Hudson Kitson. He became enamored with Isabel Dutaud Nagle, and she, 10 years older than he, became the passion of his art and life. He then established a studio in New York where he repeatedly sculpted the figure of Isabel. His major artistic influence was Paul Manship, whom he served in New York as a studio assistant. Lachaise was financially successful, but his wife lived lavishly making them poor and recipients of charity.

Lachaise also spent many of his summer months in Maine, especially in Georgetown, and he was a member of the Woodstock, New York Art Association.

Among his public commissions were reliefs in New York City for the American Telephone and Telegraph Building in 1921 and the Rockefeller Center International Building in 1934. The Lachaise Foundation, a charitable trust based in Boston “sponsors a traveling exhibition of sculptures and drawings by Lachaise; oversees the production of a limited number of casts made from plasters by Lachaise to expand and strengthen his connection with the public, through loans, gifts and sales; and maintains an archive of books, magazines and other publications concerning Lachaise, his works and career.” (Lachaise Foundation Mission Statement)