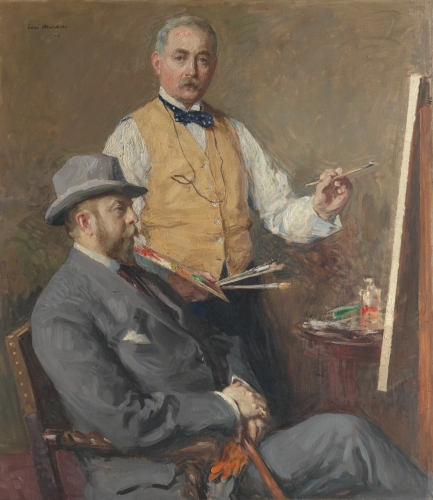 In the Studio (Gari Melchers and Hugo Reisinger), 1912

Gari Melchers, a painter and muralist, was born in Detroit, the son of a wood-carver and Paris-trained sculptor. His father sent him abroad at seventeen, but it was not until three years later that he actually reached Paris. After pursuing academic German painting in Dusseldorf, he was delighted by the discoveries of the Impressionists, especially Monet, and their use of light.

He studied at the Ecole des Beaux-Arts under Lefebvre and Boulanger, and was influenced by Bastien-Lepage and Puvis de Chavannes. Among his friends were Saint-Saens, the composer, and Dumas fils, the dramatist. His first exhibited picture, The Letter, painted in Brittany, was accepted for the Salon. From 1883 to 1909, he lived in Egmond Holland, where he did numerous peasant genre and marine scenes, and studied the Old Masters, especially admiring Vermeer. In 1909, he settled in Weimar, Germany, presiding over the art academy, but he came to the U.S. when World War I began.

Melcher returned to his home, “Belmont”, near Fredericksburg, Virginia. This is where the Madonna of the Rappahannock was painted. Above his studio door, was the motto for his art, “True and Clear.”

Melchers received the Legion of Honor decoration. His painting, MADONNA, Dutch in suggestion and painted on parchment mounted on canvas, hangs in the Metropolitan Museum of Art, New York. His work, VESPERS, is in the City Art Museum of St. Louis. There are Melcher murals in the Library of Congress, Detroit Public Library and Missouri State Capitol, and many other places in America. He also had paintings in the Luxembourg Museum, Paris, the National Gallery of Berlin, and in the Dresden Gallery.

His portraits include Austen George Fox in the Harvard Club, New York; Charles L. Hutchinson, president, in the Art Institute of Chicago; President Roosevelt in the Freer Gallery, Washington; and The Artists Mother.