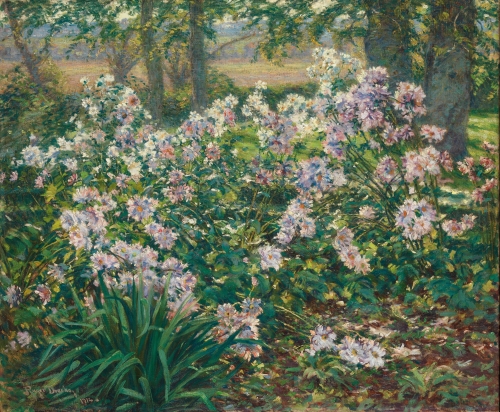 A Southerner by birth, Gaines Ruger Donoho spent most of his life far from his native region. He was born in Church Hill, Mississippi, a plantation community on the bluffs of the Mississippi River, eighteen miles north of Natchez. His father died in 1860 and, four years later, he and his widowed mother were rescued by Union cavalry and taken to Vicksburg. Soon afterward, they settled in Washington, DC, where he attended a private preparatory school.

Ruger Donoho—as he preferred to be known—studied at the State Normal School in Millersville, Pennsylvania, from 1874 to 1876, and for a short while was employed by the Office of the Government Architect. He also may have studied painting with Robert Swain Gifford, as well as Jervis McEntee. In 1878, he went to New York and enrolled at the newly founded Art Students League where William Merritt Chase and Walter Shirlaw were his instructors.

After only one year, Donoho departed for Paris and undertook a conservative course of study at the Académie Julian. During the summer months, he ventured to Étaples on the northern coast of France and the Barbizon area. Grez-sur-Loing, near the forest of Fontainebleau, was a favorite destination and while there he delighted in the rustic ambience and inexpensive accommodations. Donoho thrived during his seven years abroad and, between 1881 and 1886, his paintings were regularly accepted at the Paris Salon.

Donoho returned to New York in 1887, but soon found the demands, dirt, and bustle of city life unappealing. In late 1890, he established his primary residence in East Hampton, New York, located about one hundred miles from Manhattan on the eastern end of Long Island. The area enjoyed a colonial past and a bucolic present, and was even called “The American Barbizon.” In 1891, Donoho purchased acreage not far from the town’s historic center and built a substantial house for himself and his new wife.

Once Donoho was settled in East Hampton, his work became more intimate, lighter in palette, and increasingly impressionistic. Eventually, lush flower gardens replaced pastoral scenery as his primary theme. He also painted nocturnal scenes of area houses that recall the work of James Abbott McNeill Whistler. The shift in Donoho’s oeuvre has been attributed to his friendship with the Impressionist painter Childe Hassam, who frequented eastern Long Island and wrote the brochure for Donoho’s memorial exhibition at the Macbeth Gallery in 1916. Donoho’s work can be found in the collections of the Metropolitan Museum of Art, the Brooklyn Museum of Art, and the Mississippi Museum of Art, among others.