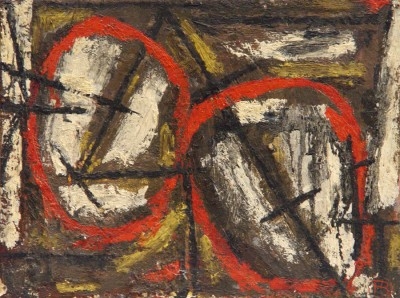 Hans Hofmann instructed many of the abstract expressionists. His teaching style allowed students such as Fritz Bultman to learn as much from him as they did from each other. Hofmann encouraged Fritz Bultman to reach abstraction and non-objective art through practice. Despite everything that Hofmann taught Fritz Bultman, their work does not look overtly similar. This phenomenon can be explained simply that Fritz Bultman had a natural affinity for creating art. Hofmann did augment the understanding of color, line, and combining dynamic shapes in Fritz Bultman.

Fritz Bultman worked in a diverse array of mediums including painting, sculpture, collage, and drawing. While Fritz Bultman explored concepts in a wide variety of mediums, he managed to keep a continuous style throughout his works. The style of Fritz Bultman developed slowly and organically.

In his early work, the Acteon myth captivated Fritz Bultman. In this myth the hunter Acteon saw the goddess Diana naked, and she punished him by turning him into a deer and hunting him. The myth resonated with Fritz Bultman in many ways. Fritz Bultman saw it as a metaphor for the risk inherent in an artist looking for superficial attractiveness. Fritz Bultman also saw in it the reversal of sexual parts when power is lost. While these works are still abstract, the meaning behind the myth inspired Fritz Bultman to create dramatic forms.

In May 1950, a group of New York School of Abstract Expressionist painters wrote a letter to The Metropolitan Museum of Art protesting its anti-abstract bias in the selection of painters for the exhibit “American Painting Today 1950.” The letter appeared in the New York Times and the Herald Tribune. A photo of the group taken on November 24, 1950 appeared in Life magazine’s January 15, 1951 issue, captioned “Irascible Group of Advanced Artists Led Fight Against Show.”

As a member of the New York School of Abstract Expressionists, Fritz Bultman signed the historical and infamous “Irascibles” letter along with William Baziotes, James Brooks, Willem de Kooning, Jimmy Ernst, Adolph Gottlieb, Robert Motherwell, Barnett Newman, Jackson Pollock, Richard Pousette-Dart, Ad Reinhardt, Mark Rothko, Theodoros Stamos, Hedda Sterne, Clyfford Still and Bradley Walker Tomlin. Missing from the famous Life magazine photo known as “The Irascibles” were Fritz Bultman, Hans Hofmann and Weldon Kees. Unfortunately, Fritz Butman was out of the country at the time this photo was taken because the Italian government had invited the artist to study sculpture. The career of Fritz Bultman was directly affected by this experience as every other member of the group went onto great fame.

Fritz Bultman taught in New York City at the Pratt Institute and Hunter College in addition to the Fine Arts Work Center in Provincetown, Massachusetts. Fritz Bultman showed his work at the Stable Gallery, Martha Jackson Gallery, and Gallery Mayer in the late 1950s. In 1964-1965, Fritz Bultman traveled to Paris with a fellowship from Fulbright. Also, Fritz Bultman received grants from the Guggenheim Foundation in 1975 and the Art Institute of Chicago.

It is clear that Fritz Bultman had amazing talent and deserved both fame and fortune. Both critics and fellow artists praised Fritz Bultman. Robert Motherwell described Fritz Bultman as one of the most splendid, radiant, and inspired painters of [his] generation, and of them all, the one drastically and shockingly underrated. He went on to say that the work of Fritz Bultman presents a standard of sensibility, a background of the best of Modernism and a painting instinct that, if anything, is too good for the present day public. The critic Belle Krasne said “There is something elemental in all of Bultman’s canvases.” He went on to praise the passion and freedom of Fritz Bultman. In the New York Times, Stuart Preston declared that Fritz Bultman had “remarkable power of organization.”

Fritz Bultman died on July 20, 1985 in Provincetown, Massachusetts of cancer.