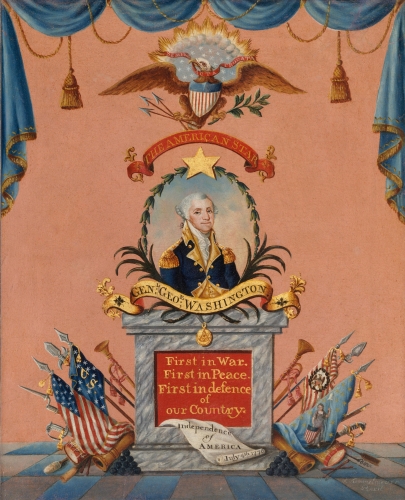 American museums and private collectors have been acquiring paintings by Frederick Kemmelmeyer for nearly seventy years, and his works have been reproduced in books and articles—yet the man behind the brush has proven elusive to researchers. This research note presents recently uncovered information that is hoped will aid future scholars in advancing our understanding of Frederick Kemmelmeyer’s life and career.

Primary among the unanswered questions about Kemmelmeyer are when and why he came to America. The earliest documentation firmly identifying Frederick Kemmelmeyer as an artist is found in a 1788 Baltimore newspaper advertisement. In her book, Carolyn Weekley suggests that Kemmelmeyer was in Charleston, South Carolina, as early as 1783, citing the marriage record of “John Frederick Christian Kemmelmeyer, doctor, born in the Duchy of Wirttemburg [sic]” and “Maria, widow of Christian Gruber, deceased,” at Charleston’s St. John’s Lutheran Church. MESDA had recorded this marriage record in its Craftsman Database and the citation has been a source of discussion among scholars for many years.

The reason for the debate is that no link between the John Frederick Christian Kemmelmeyer in Charleston and the Baltimore artist Kemmelmeyer could be made to establish them as the same man. A listing of Hessian troops fighting for Britain in America and an 1812 Philadelphia newspaper announcement may provide the elusive connection between the two men.

It is likely that Frederick Kemmelmeyer was in Charleston at least four months earlier than the St. John’s marriage record announcement—and he could have been in America as early as 1776. Muster roles list a Friedrich Kimmelmeyer serving as a doctor (or related medical position) among the Hessian troops fighting for Britain in America. He served as a Feldscher (assistant medical officer), in the Rall Regiment, the unit that was surprised by General George Washington’s 1776 Christmas attack after crossing the Delaware River near Trenton, New Jersey. It is not known if Friedrich Kimmelmeyer was with the regiment in New Jersey but we do know that he deserted to the enemy in October 1782 in Charleston.

Kemmelmeyer’s marriage to Maria Gruber may have been prompted by the birth of an illegitimate child. Carolyn Weekley cites a child born in Charleston on 2 October 1782 named Anna Rosina Maria Kemmelmeyer—this is exactly the same month that Kemmelmeyer is recorded as deserting the Hessian regiment. As Weekley suggests, the child may have been fathered by Maria Gruber’s late husband, but Anna Rosina Maria’s birth and the Kemmelmeyer’s desertion occurring at the same time create an interesting coincidence.

Regardless, the marriage between Kemmelmeyer and Gruber was short lived. In a July 1783 edition of the South-Carolina Gazette and General Advertiser, the couple informed the public that, “they have this day by mutual consent agreed to for ever separate as MAN and WIFE; and for that purpose have entered into articles of separation.” Their divorce seems to have been a messy one.

Public opinion about Kemmelmeyer’s marriage and divorce may have been his motivation for a move to Baltimore, Maryland, between 1784 and 1788.

A Philadelphia newspaper announcement printed nearly thirty years after the Kemmelmeyer-Gruber marriage—at time when the artist Kemmelmeyer was no longer working in Baltimore but traveling as itinerant painter in Western Maryland and Virginia—may provide further support for a connection between the Kemmelmeyer in Charleston and the painter in Baltimore. In June 1812, a Philadelphia newspaper reprinted an article from Winchester announcing the engagement of Kemmelmeyer’s presumed daughter, Francis, to a Peter Klipstine: “John Heiskell, in his Winchester Gazette, says, that Peter Klipstine, printer, is dove-tailed, to Francis Kemmelmeyer, of that borough.

Frederick Kemmelmeyer advertised that he was an artist for the first time in a Baltimore newspaper. It is not known how long he had been in Baltimore or where he was living. He announced that he had “opened a DRAWING-SCHOOL for young Gentlemen, at his house, next door to Doctor Lemmon’s in Holliday-street.” There are no works attributed to Kemmelmeyer before he was living in Baltimore, but he may have completed as-of-yet unidentified paintings before moving to Maryland. What he was doing during the time between 1783 (after the divorce in Charleston) and his advertisement in Baltimore five years later is still unknown.

Many of the paintings Kemmelmeyer completed between 1788 and 1800, when he was living in Baltimore, directly reflect the culture of his native Europe. Those paintings were inspired by—or in some cases directly copied from—published European print sources.

In 1803, Kemmelmeyer left his business in Baltimore to settle near the new national capital on the banks of the Potomac River. In June 1803, he was in Alexandria, Virginia, professing that “he has become a resident of this town,” and customers could find him “at Mr. Jacob Shuck’s Duke Street.” By October, Kemmelmeyer had relocated to Georgetown in the District of Columbia, on the northern side of the Potomac.

There exists no documented reason for Kemmelmeyer’s relocation to Alexandria, but the move could have been a calculated decision to capitalize on the public’s increasing demand for likenesses of George Washington, hero of the American Revolution and Father of Our Country. Washington had died four years before, in 1799, and Kemmelmeyer may have believed that a shop selling paintings of Washington in the new federal capital was potentially lucrative. As such, a number of Kemmelmeyer’s paintings finished during his stay near the Federal City are of the famous Virginian—indeed, over his career, Kemmelmeyer would create more paintings of George Washington than of any other individual.[46]

By far Kemmelmeyer’s most well-known painting of George Washington is GENERAL GEORGE WASHINGTON / Reviewing the Western army at Fort Cumberland the 18;th of October 1794. In that painting, signed “F. Kemmelmeyer. Pinxit.,” Washington is pictured astride a white horse, facing a line of soldiers assembled before Fort Cumberland in western Maryland. Kemmelmeyer paid particular attention to uniform details, both on Washington and those of his army. Kemmelmeyer painted the theme several times throughout his career. The series was executed to commemorate Washington’s successful quelling of the Whiskey Rebellion in 1794. The significance of the paintings might be more personal. As mentioned earlier, from a business perspective paintings of George Washington must have been a steady source of income for Kemmelmeyer, driven by a nationwide obsession in the early nineteenth century for the president’s likenesses; however, viewed through the artist’s personal identity, Washington at Fort Cumberland might be seen as a signal of Kemmelmeyer’s growing identity as an American citizen.

Kemmelmeyer was naturalized at the General Court for the Western Shore of the State of Maryland on 8 October 1788 in Annapolis, under the name Frederick Kimmelmeiger. Becoming a United States citizen was a significant step in Kemmelmeyer assuming an American identity, and it is possible to consider the creation of the first Washington at Fort Cumberland painting in 1794 as a symbolic representation of that process.

Following his two-year stay around the national capital, Kemmelmeyer took on an itinerant lifestyle that defined the rest of his career. Kemmelmeyer’s travels took him through western Maryland and Virginia and briefly into Pennsylvania. For much of that time, Hagerstown, Maryland, served as a base from which he traveled to other locations. Why Kemmelmeyer left the Washington, DC, area is unknown. It could be that he found fierce competition for commissions in that area and like other artists of the period decided to make a living on the road.

Whatever his reasons for the abrupt change in lifestyle and business, Kemmelmeyer didn’t completely abandon the types of paintings he had become known for in Baltimore and Washington. One of his most accomplished genre paintings depicts Christopher Columbus’s 1492 arrival in the New World.

He continued to execute genre paintings through the first decade of the nineteenth century, such as Battle of Cowpens, but if the number of surviving portraits is indicative of his output from 1805-1816, then commissions for his likenesses dramatically increased. Kemmelmeyer continued to paint oil portraits as an itinerant portraitist, but they were far outnumbered by the number of pastel drawings he produced from 1805 to 1816.

By 1811, Kemmelmeyer was in Libertytown, Frederick County, Maryland, where he painted eight-year-old James McSherry Coale and signed the picture.

As Kemmelmeyer aged, his ability to paint deteriorated. As early as 1813, some potential clients had come to doubt whether Kemmelmeyer had any future as a painter. John Henkel of Jefferson County, Virginia, reported in a letter that “olde F. Kimelmeire has come to Charlestown and has started at Drawing and Will get a vast of Business if he could do it to perfection[.] But he is getting too old he Cant imitate one in ten[.] the old man Drinks harder Which makes much against him in Drawing.”

Kemmelmeyer’s last signed portrait is indicative of his old age and failing health. On 17 July 1816 he painted Catharina Heiser Weltzheimer, who operated a tavern in Shepherdstown, Virginia. Kemmelmeyer may have painted Catharina’s portrait in exchange for room and board during his stay. It is difficult to judge whether or not Catharina would have been satisfied with the artistic quality of the final product. Parts of Catharina’s body are strangely proportioned. Catharina’s necklace does not sit naturally on her neckline; instead it seems to hover. Her right eye is disproportionate to the rest of her face. Her hands are stiff, and not well defined.

Only eleven portraits that can be firmly attributed to Kemmelmeyer are known—six signed and five attributed. Of those eleven, nine are pastels. What survives is most likely only a fraction of the many “Likenesses as large as life to Miniature, in Oil, Crayons or Water Colours” that Kemmelmeyer produced during his itinerant period. The fragility of pastel portraits may reflect the low number of surviving Kemmelmeyer paintings in that medium; that said, the fact that even nine of Kemmelmeyer’s pastel portraits survive suggests an impressive output as he traveled around the mid-Atlantic region.

Conclusion
Little is known about Kemmelmeyer after 1816. Two months after painting Catharina Heiser Weltzheimer. Kemmelmeyer was back in Hagerstown where he “opened a School for Drawing, and Painting in Water Colours… .” Coincidentally, advertisements announcing his opening of drawing schools are both the first and last recording of Kemmelmeyer’s career as an artist. It is possible that his ability to paint had dramatically deteriorated due to age, bad health, and—if John Henkel’s 1813 letter is accurate—heavy drinking. Operating a school for drawing may have been his only option remaining for making a living through his art. Frederick Kemmelmeyer disappears from historic documentation after 1816. He probably died sometime in the 1820s.

Kemmelmeyer left a diverse catalog of work that illustrates the progression of his life and career. He most likely arrived in America as a Hessian medical officer fighting for the British during the War for Independence. His probable association with fellow Hessian surgeon assistant Philip Klipstein and the subsequent marriage of their children is a ripe opportunity for further research, as is a fuller understanding of Kemmelmeyer’s artistic training.

Choosing to stay and make the United States his home, Kemmelmeyer preserved aspects of his German-Protestant identity and painted military and religious subjects from his native land and culture. He based the composition of many of his paintings on published prints that may have been recognizable to his clients. Kemmelmeyer’s capitalization of the nationalism that arose after George Washington’s death is a significant moment in his career. Washington became Kemmelmeyer’s most repeatedly painted subject and those images are particularly important as visual testament of an immigrant’s assimilation into American culture.

When analyzed as a whole, the paintings by Frederick Kemmelmeyer reveal an artist who may not have possessed exceptional talent but one who certainly lived a notable life. The story his paintings tell is of a German immigrant holding onto his heritage, but also of someone who eventually assimilated into an American painter capable of executing historical paintings and portraits “as large as Life… .”