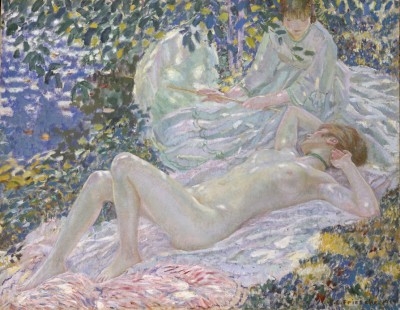 Frederick Carl Frieseke was among the group of American Impressionist artists who settled in the French village of Giverny, forty miles northwest of Paris. This group, which lived in Giverny in the early 1900s, is sometimes referred to as the Giverny Luminists, was attracted to the village by the presence of the great French Impressionist Claude Monet, who had settled there in 1883.

Frieseke was born on April 7, 1874 in Owosso, Michigan and began his professional life as an illustrator. Deciding to become a painter, he studied first at the Art Institute of Chicago from 1893 to 1896 followed by a year of instruction at the Art Students League of New York. He went to France to further his education, arriving in Paris in 1897. He worked in the atelier of Jean-Joseph Benjamin-Constant and Jean-Paul Laurens at the Académie Julian. He also received criticism, if not formal instruction, from Auguste-Joseph Delecluse, and he studied very briefly–perhaps for only one week–in James McNeill Whistler’s Académie Carmen. Nonetheless, Whistler’s influence on Frieseke’s developing style was strong. Frieseke absorbed the great master’s appreciation for the “infinite gradation” of color that was possible through paint. The flattened space and flowing line of the Art Nouveau style were also significant influences in this formative period of the artist’s career.

By 1901, the first year a Paris address is known for Frieseke, he was residing at 51, boulevard Saint-Jacques in the Montparnasse quarter, an area favored by American artists. He was within a few short blocks of Delecluse’s atelier and the Académie Carmen. He achieved his first successes with paintings of the nude, one of which was purchased by the French Government in 1904. Parisian parks and boulevards and summer landscapes painted in the country rounded out his oeuvre at the turn of the 20th century.

Frieseke is believed to have visited Giverny as early as 1900; a summer visit in 1905 is documented; and in 1906 he and his wife moved into a two-story cottage that adjoined the property of Claude Monet. At Giverny his colleagues included the American painters Guy Rose, Lawton Parker, Edmund Greacen, and Richard E. Miller, with whose work Frieseke’s is often compared. While he maintained an apartment and studio in Paris all his life, Giverny was Frieseke’s summer residence for fourteen years. Once settled there, Frieseke began to create luminous paintings depicting both interiors and outdoor garden scenes, skillfully combining both solidly rendered figures and his interest in overall patterning. Frieseke’s palette during his Giverny period primarily consisted of greens, blues and violets, dazzling golds and oranges, and creamy whites, which capture and reflect the brilliant summer sunlight.

In 1920, Frieseke bought a summer home at Le Mesnil-sur-Blangy in Normandy and left the Giverny art colony. He commenced production of a large group of canvases representing frontally posed female figures, most often using his daughter Frances as model. The palette is darker than that of his Giverny period and shows more interest in qualities of chiaroscuro as he explored less brilliant light effects. Works painted after 1920 evidence a great deal of control on Frieseke’s part, which, combined with the deeper palette, contribute to a sense of psychological awareness and intensity.

Frieseke exhibited extensively throughout his lifetime, both in the United States and in his adopted France. He earned a medal from the St. Louis Exposition of 1904; the Temple Gold Medal from the Pennsylvania Academy of the Fine Arts in 1913; a prize at the Panama-Pacific International Exposition of 1915; and the William A. Clark Award from the Corcoran Gallery of Art in 1935. His dealer in the United States was William Macbeth, who regularly displayed his work in one-man and group exhibitions. Frieseke died on August 28, 1939, a few months after a major retrospective of his work opened at the Grand Central Art Galleries in New York City.