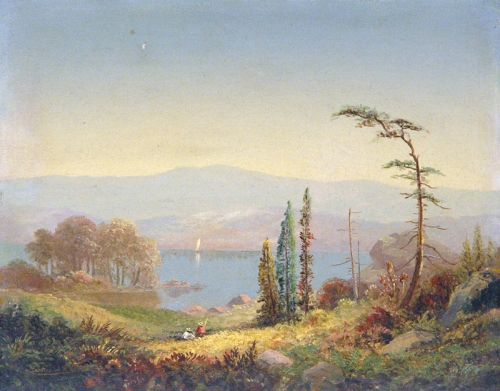 Born in Bangor, ME in 1820, Frederick Butman operated an apothecary shop in Gardiner, ME and helped found the local gas and water company. Without the benefit of instruction, he began to paint figure studies. He arrived in San Francisco in 1857 and exhibited the earliest known painting of Yosemite Valley at the Mechanics’ Institute Fair.

One of the first California artists to devote himself exclusively to landscapes, as well as Yosemite, he also worked in Oregon’s Columbia River area and Washington in the 1860s. He exhibited in San Francisco a variety of mountain scenes including views of Mt Shasta, Mt Hood, and Lake Tahoe.

Returning to the East in 1867, he exhibited these scenes to an enthusiastic audience. A trip was made to Europe where he sketched in France, the Pyranees, and Swiss Alps before returning to San Francisco in 1869. He painted about 80 paintings in California and received high praise from the local press.

His work commanded large sums of money during his lifetime. Butman was just beginning to do some of his finest work when he returned to Maine for a family visit and died unexpectedly in Gardiner on July 26, 1871.