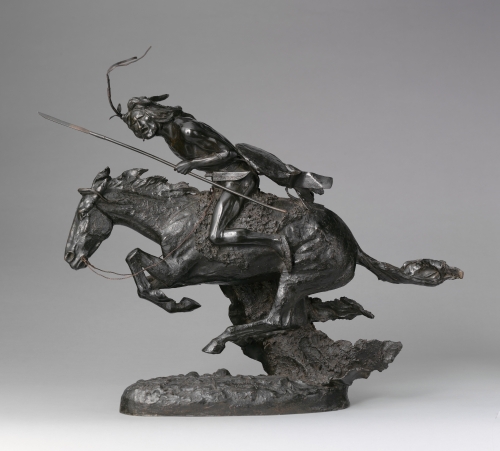 Born at Canton, New York, Frederic Remington became the foremost turn-of -the-century illustrator, painter, and sculptor of western action-packed subjects with cowboys, Indians, horses, soldiers, and other frontier characters. His style was realistic, and much of his work was narrative with strong implication that the West belonged to the white man, but his Indians were portrayed with dignity and nobility.

During his lifetime, Remington created about 25 bronzes with the most famous being “The Bronco Buster”, and one of the largest being the cowboy statue for Fairmount Park in Philadelphia. He also did about 3000 paintings, some which he burned towards the end of his life.

Remington was the son of the local newspaper publisher, and in 1878 entered the Yale School of Fine Arts for one year, excelling at football and art. Because of his father’s death, he could not afford to return to school, so he traveled West and made numerous sketches, selling one to “Harper’s Weekly.” He studied for a short time with J. Alden Weir, a founder of American Impressionism, at the Art Students League in New York, but did not stay there for long because he had little patience for formal schooling.

In the next years, he made many trips to the West and Plains States and worked as a cowboy, ranch hand, lumberjack, and gold miner in Apache country in Arizona. He also sent illustrations back to “Outing Magazine,” “Harper’s Weekly,” and “Scribners.” Publishers used everything he sent them because his experiences were so fascinating to easterners. He also illustrated articles by Theodore Roosevelt for “Century Magazine” and for Frances Parkman’s novel, “Oregon Trail.” During the Spanish American War, he was an artist-correspondent in Cuba. Other travels were to North Africa, Mexico, Russia, Germany and England.

Regarding himself always as a fine artist, he regularly sent paintings to New York City from the West for exhibition at the National Academy of Design and the American Watercolor Society. He also exhibited in New York galleries including the Knoedler Gallery, where he had his last public show in 1926.

He was ever-fascinated by the motion of horses and took many photos of them in the newly invented roll film box camera. He painted and sculpted the animals often, frequently at full gallop, but always juxtaposed them with human figures, never drawing single horse portraits. The same was true of his landscapes, which invariably had human activity in them. In 1895, he began working in bronze and cast his famous work, “The Bronco Buster.” He became so enamored of sculpting that his painting quality deteriorated.

His early paintings of the West were much more literal depictions than his romanticized later ones of the disappearing West. In his later years, he preferred to paint nocturnes because it allowed him greater freedom and depth of perspective.

For his bronze sculpture, he used the foundry Roman Bronze Works, the first foundry in the United States to devote itself exclusively to the age-old lost wax method. Foundry owner Ricardo Berteli and Remington worked closely together to explore technical and creative aspects of casting bronze. Because Remington is so associated with the American West, it may be surprising that he spent time with Augustus Saint-Gaudens and others in the artist colony in Cornish, New Hampshire. He almost bought property there, finding the fellowship of the community very stimulating.

He died in 1909 at Ridgefield, Connecticut from an appendicitis, when he was age forty eight. From 1886 to six months before his death, his home had been in New Rochelle, New York where he had a large studio.