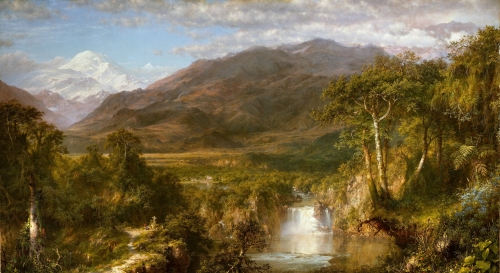 Born in Hartford, Connecticut, Frederic Church became a leading figure in the Hudson River School* of painters, and in the 1850s and 60s was one of America’s most famous painters. The paintings for which he became known were landscapes conveying a serene sense of light and space, showing nature in its pure state without the presence of human beings.

His career rose very fast, taking off when he was in his early twenties, but by the time he was forty, public taste had changed, and this circumstance combined with his own ill health caused his reputation to fall considerably.

He came from a wealthy family and received his first art instruction from Benjamin Coe. His primary master was Thomas Cole with whom he lived and painted in Catskill, New York from 1844 to 1848. Church was Cole’s first and only student. However, his own style differed from Cole’s in that it was not laden with romanticism and allegory because he believed that an artist should capture the realities of nature and focus on the relationship between light and form.

By age 19, he made his debut at the National Academy of Design* and was elected an Associate Member. He also set up a studio in New York City, but during this period the Hudson River Valley came to have deep personal meaning, and he determined to make his home there. From 1864 into the 1890s, he frequently worked from his studio at the topmost part of his family farm near Hudson at Bee Craft Mountain from where he had a broad panoramic view that he often painted.

But his subject matter went far beyond the Hudson River and Niagara Falls. He found landscapes in South America where he first traveled in 1853, staying for seven months, and the resulting paintings were highly acclaimed at the National Academy. He also traveled to the Arctic, the Tropics, and in 1867 to Europe and North Africa.

By 1877, severe rheumatism crippled his right hand, and he attempted to paint with his left hand, but his career was essentially curtailed. The last twenty years of his life, seemingly forgotten as an artist, he spent at Olana, his Moorish-style palace on the Hudson River and also traveled to Mexico and Maine where he painted Mount Katahdin.