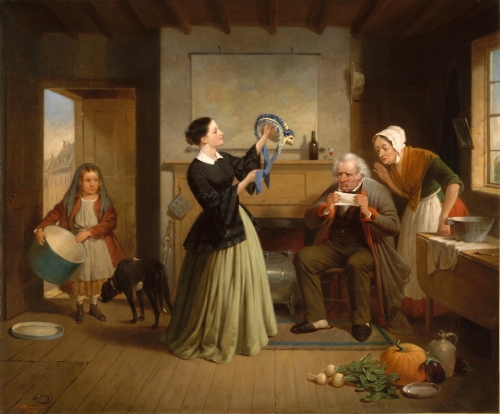 Francis William Edmonds, an early American genre painter, was born in Hudson, New York in 1806. Edmonds, thanks to an uncle who arranged a clerkship for him, began his professional life as a banker in New York City, and also took evening classes at the National Academy of Design. In 1827, showing enough skill to pass an admissions test by submitting artwork, he was admitted to the Academy’s exclusive Antique Class. However, shortly after that, from 1828 to 1832, he was diverted from his art pursuits by a banking job, which meant a move to Hudson, New York.

Then, moving back to New York City, he “began a self-retraining program”, and by the late 1830 was active at the National Academy where he was elected an Associate in 1837, and from 1849 until his death in 1863, served as a Trustee overseeing the Academy’s financing and building of permanent quarters.

During the last few years of his life, he signed his paintings with the the pseudonyms E.F. Williams and F. Williams, something he likely did because of not wanting to blur his reputations as both a serious businessman and skilled artist. However, in 1855, his banking reputation was tarnished because of controversy about his management of bank funds.

The majority of Edmonds’ paintings are scenes of rural everyday life, often with humorous overtones, but he also painted literary subjects, portraits and landscapes, which typified the nationalistic art that was so popular with the American public during the 1830s.

William Sidney Mount was viewed as the leading genre artist of the time. Scholars suggest that Edmond’s work such as The Image Peddler, 1844, in the collection of the New York Historical Society, is similar to Mount’s in subject matter and light, cheerful characteristics.

Francis Edmonds died in 1863 at his home, Crow’s Nest, on the Bronx River, New York.

Sources:
David Dearinger, Editor, Paintings and Sculpture in the Collection of the National Academy of Design
Matthew Baigell, Dictionary of American Art
Peter Hastings Falk, Editor, Who Was Who in American Art