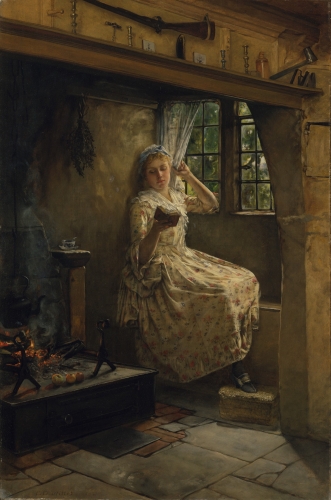 Born in Mattapoisett, Massachusetts and raised in East Bridgewater, Frank Millet was a respected teacher, and an academic painter and muralist known for historical genre including scenes from Alaska and Sioux Indians of Minnesota. teacher. He was President of the Guild of Boston Artists, and in 1893, served as Director of Functions at the 1893 Columbian Exposition in Chicago.

As a youngster, he lived on a farm whose setting was rooted in colonial America. He was a drummer boy in the Union Army, and in 1869, graduated from Harvard College with a degree in literature but during his sophomore year had developed a strong interest in painting.

His first artistic endeavor was decorating the Eagle Cotton Gin in Bridgewater, to help a friend who had the commission. He worked as a lithographer for the Boston “Advertiser” and then in 1871 went to Antwerp, Belgium, to study painting at the Royal Academy where he won many prizes and was honored by the King.

He studied painting in Rome and Venice and returned to the United States in 1875 to become a correspondent for the “Advertiser” at the Philadelphia Centennial Exposition where he exhibited. In 1877, he served as an artist-correspondent during the Russo-Turkish War, and in 1884, he was back in Europe where he and John Singer Sargent and Edwin Austin Abbey formed a close working friendship. Meanwhile, in 1876, he had become one of the founders of the Boston Museum School of Art along with John La Farge and William Morris Hunt.

In Antwerp he had become friends with German art student Otto Grundman, whom Millet later successfully recommended to become Director of the newly formed School of the Museum of the Fine Arts in Boston.

He married in France, and he and his wife returned to Europe, becoming a part of prominent society in France and England with close friends including John Singer Sargent, Elihu Vedder, and Augustus St. Gaudens.

In 1876, he painted murals at Trinity Church with John LaFarge, who benefitted from Millet’s European-earned knowledge of working with encaustic. He also did an occasional portrait including Samuel Clemens, better known as Mark Twain.

The next fourteen years were extremely productive for him with many painting trips in Europe, and in 1885, he was elected to the National Academy of Design. In 1892-93, he took up his job as Director of Decorations and Functions at the Chicago World’s Fair. In 1894, he returned to England and settled down to easel painting, but gradually became more and more involved in mural painting and give up genre subjects. In 1908, he was a special envoy to Japan on a government mission to Tokyo.

He lost his life on April 14, 1912 when he, having been appointed Director of the American Academy in Rome, gave his life preserver to a fellow passenger on the sinking “Titanic.”