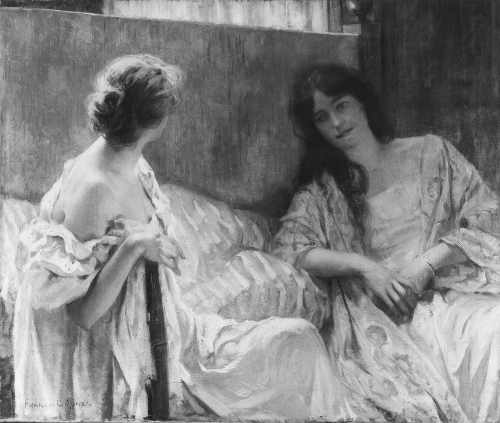 A painter of florals, figures and genre subjects, Francis Coates Jones was a noted easel and mural painter. Family wealth provided for basic needs during his lifetime, although he also made money from his artwork including illustrations for Scribner’s and Century magazines.

Francis Jones was born in Baltimore, Maryland in 1857, and was the younger brother of Hugh Bolton Jones, who also became a well-known painter and with whom he did some collaborative artwork.

Francis attended a Quaker school in Baltimore, and when he was age nineteen, he and his brother went to London where they visited Edwin Austin Abbey. From there they spent a year in France at Pont Aven, and in the autumn of 1877, went to Paris, where Francis enrolled at the Ecole des Beaux-Arts and studied in the antique class of Henri Lehmann. After a family tour with his brother, parents and sister to Spain and Morcco, Francis returned to Paris, and enrolled in the Academie Julian. He remained a student there until 1881, studying with Jules Joseph Lefebvre and William Adolphe Bouguereau.

He returned to New York City and took studio space with his brother in the Sherwood Studio Building at 58 West 57th Street. After one final trip to Paris, he settled permanently in New York.

Reflecting his teachers and his artistic education, Jones painted in an academically detailed style that was also rich in paint handling. Although a genre painter of contemporary life, Jones had a special feeling for richly furnished interiors and costumes. He later adopted Impressionism. The Berkshire Mountains of South Egremont, Massachusetts were a subject he pursued during the summers.

Jones taught at the National Academy of Design in New York City. His illustrated views of historic houses in Washington, D.C. appeared in Scribner’s Magazine in October, 1893. He was also a mural painter, commencing in 1895, and by that time his reputation was very well established. He and his brother, Hugh, and their invalid sister, Louise, moved into lavish studio accommodations at 33 West Sixty-Seventh Street, and it “became a showplace of rich decorative handwork.” (Davis, 326)

He died in 1932, having suffered a stroke three years earlier.

His work may be found in the Art Institute of Chicago, the Museum of Fine Arts in Springfield, Massachusetts and the Metropolitan Museum of Art.

John Davis, “Francis Coates Jones”, Paintings and Sculpture in the Collection of the National Academy of Design, 1826-1925, David Dearinger Editor.