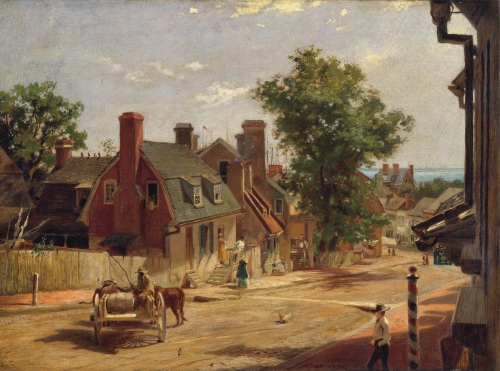 Francis Blackwell Mayer was born in 1827 in Baltimore, Maryland. He studied there under Alfred Miller, the well-known painter of the West. It is unknown whether Mayer had a natural interest in Indians or was inspired by his contact with Miller, but he went to sketch the Sioux in the Minnesota Territory in 1851. Mayer was a young man without much artistic training, but his sketches and thoughts on his travels were published in 1932, long after his death, as “With Pen and Pencil on the Frontier in 1851.”

Mayer studied in Paris with Gustave Brion and Charles Gleyre during the period 1863 to 1870. He then lived for the remainder of his life in Annapolis, Maryland, where he made a name for himself as a painter of landscapes and anecdotal colonial and Civil War genre scenes.

Mayer’s drawings and watercolors of Plains Indians are valued today as a record of their way of life. Painter Francis D. Millet would later use Mayer’s “Treaty of Traverse des Sioux,” painted during the latter’s trip in 1851, as a source of anthropological information.