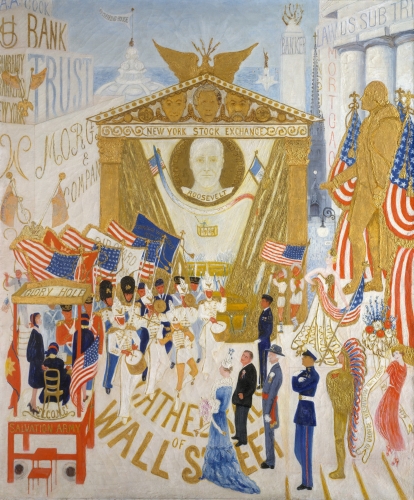 The Cathedrals of Wall Street, 1939

A legend of New York Bohemian lifestyle in the early 20th century, Florine Stettheimer was an artist who renounced academic training and focused on naive depictions of New York society as well as family portraits, flower and simply styled, lyrical conversation pieces. Other than idiosyncratic and nonconforming, umbrella terms are not easy to assign to her work.

She was born into a German international banking family in Rochester, New York, and lived a privileged existence during her youth between New York, Munich, Berlin, and Stuttgart. She studied painting in these cities including at the Art Students League in New York with Carroll Beckwith, H Siddons Mowbray, and Kenyon Cox.

Eventually she established a studio in Munich where she did derivative academic paintings. But in 1912, after a year spent in Paris, she became expansive in her style, much influenced by the Ballet Russe with Diaghilev. She created her own ballet with hand-crafted figures, toy-like with satin costumes, beads, and foil.

At the outbreak of World War I, she returned to the United States and infatuated with this country, began to incorporate homespun American themes into her work with recognizable friends and family members.

She had her first and last solo exhibition in 1916 at Knoedler’s in New York. It received only mild reviews and, a big disappointment to her, this negative experience caused her to exhibit in the future only in group shows.

Her paintings following the war chronicled the rich and famous of New York and celebrated their lifestyle with no sign of guilt because of excessive wealth and indulgence. She depicted life as a series of parties and established her own artistic salons, first at her family’s apartment on West 58th Street and after 1935, at her studio and home at 8 West 40th Street.

When she died in 1944, most of her paintings were still in the possession of her family because she refused to sell her work after the failed Knoedler exhibition. Family members then donated her work to numerous museums, and two years after her death, a large retrospective was held at the Museum of Modern Art.