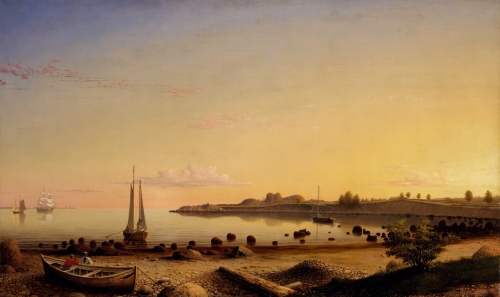 Born in Gloucester, Massachusetts with the name of Nathaniel Rogers Lane, Fitz Henry (Hugh) Lane became one of America’s preeminent marine painters. During his lifetime, he was described as the “country’s second-greatest marine painter, but he faded in renown from about 1870 until the re-emergence of interest in American painting in the 1930s.” (Dunlap)

Fitz Henry (Hugh) Lane was crippled since childhood and walked with crutches, a condition long attributed to childhood disease. Latest research though has shown that disease was a remote and unlikely culprit for Lane’s loss of mobility, the most plausible of possibilities being the ingestion of the neurotoxin Datura stramonium.(see Craig, pages 17 & 18).

As an artist, he had no formal training but early learned printmaking as he worked for Pendleton’s Lithography shop in Boston doing naval architecture drafts and topographical views of Boston and its harbor. Lane’s first lithograph produced for commercial consumption was executed in 1832, the very year he began employment at Pendleton Brother’s. Titled Sicilian Vespers, it is a sheet music cover, most likely pirated from a British sheet music cover.[Craig, Pgs. 48-51] Even if pirated, it still stands as a testimony to Lane’s talents, given that he was being published only a few months into his time at Pendleton’s, when he was still an apprentice lithographer in training.

Pendleton retired around 1836, and Lane and an associate named John W.A. Scott formed their own lithography shop in Boston in 1844. From that time until the late 1840s, Lane focused on a lithography career doing political posters, panoramic views, sheetmusic covers, calling cards, etc. Lane remained in partnership with John W. A. Scott until 1847, when he sold his part of the company to Scott. [Craig, Pgs. 74-75] (Lane would still periodically contribute lithographs to the firm for publication purposes in later years.)

Then he worked primarily in Gloucester where he concentrated on drawing and painting and developed his mature style of a highly personal luminism of light-filled seascapes, harbor and shoreline views. The first know Luminist paintings by Lane date from the late 1840′s. Titled Boston Harbor, 1847 (Cleveland Museum of Art) and Annisquam Marshes, Near Gloucester, Massachusetts, 1848 (private collection) are the two earliest known oil paintings by Lane to feature striking light-soaked skies and Luminist effects.[Craig, Pg. 140] Overwhelmingly a marine painter, he did create several landscape compositions. From the beginning of his career to its end, he faithfully recorded every detail his eye beheld in a vista, from individual lines of ships’ rigging to leaves on bushes in the foreground, pebbles along a beach, or even individual weathervanes atop churches in a compositions background.

Boston marine painter, Robert Salmon was a strong influence on his work. Long believed to have cultivated shipping magnate Samuel Cunard as a client, there is no conclusive evidence to confirm any patron/artist connection between Lane and the Cunard shipping firm, aside from one known formal ship portrait by Lane of a Cunard steamship, The Britannia Entering Boston Harbor, 1848, (Museum of Fine Arts, Boston). Lane’s Cunard Liner Britannia, 1842 (Peabody Essex Museum) long believed to have been a commissioned work, has been proven to have in fact been a deliberate forgery. See [Craig, Pgs. 171 & 72]

In the 1850s, he pioneered new chemical pigments in red, yellow, orange and also was one of the first to try photography to help his studio painting process.

A mystery surrounds the name of Fitz Henry (Hugh) Lane. In December 1831, he first requested a name change from Nathaniel Rogers to Fitz Henry Lane, and this request was granted in March 1832. (Dunlap) John Wilmerding, Professor of Art History at Princeton University and Lane scholar said that for many years it has been thought that Lane’s family changed the name, but a document has surfaced showing that, in fact, it was the artist who made the petition to the Commonwealth of Massachusetts. On most of his paintings, he signed with only his initials, Fitz H.Lane or F.H. Lane and almost never spelled out the name even on legal documents.

He was not called Fitz Hugh Lane until 1938, 73 years after his death. According to scholars at the Cape Ann Historical Association and the Gloucester Archives Committee, he “was Fitz Henry Lane when he died in 1865. He was Fitz Henry Lane in an 1882 biography of his student Mary Mellen. (Lane had more than one art student, having given detailed instruction to William Bradford and Benjamin Champney, among several others.)

He was Fitz Henry Lane in the 1902 Lane family genealogy. He was Fitz Henry Lane, the ‘famous marine artist’, in 1915 when his nephew and namesake died. He was more or less forgotten by the world through the 1930s, but in 1938 he was Fitz Hugh Lane as evidenced by two 1938 items: a notice for the sale of a ‘Fitzhugh Lane’ lithograph in an unknown newspaper (perhaps the Gloucester Daily Times, but this is not proven); and an October, 1938, letter to the Cape Ann Scientific, Literary and Historical Association (now the Cape Ann Historical Association) from the Frick Art Reference Library in NYC asking about the artist ‘Fitz Hugh Lane’. John I. H. Baur and the Karoliks called him Fitz Hugh Lane.

However, Lane wrote out his full name of Fitz Henry Lane on two paintings: Clipper Ship Sweepstakes (1853-Museum of the City of New York) and The Golden State Entering New York Harbor (1854-Metropolitan Museum of Art). Attempting an explanation, John Wilmerding said: “There is only speculation that Lane signed his full name for the New York market because he was less well known there and wanted to establish himself”. (NY Times)

Sources:
Main source: “Fitz Who?” by Sarah Dunlap and Stephanie Buck, in the Essex Society of Genealogists’ publication, Essex Genealogist, February 2005, pp. 11-16. This article is also found in the 2005 reissue [by the Cape Ann Historical Association] of John Wilmerding’s book, Fitz Henry Lane, that was originally published as Fitz Hugh Lane by Praeger in 1971.
Additions and corrections based on Fitz H. Lane: An Artist’s Voyage Through Nineteenty Century America. History Press 2006
Carol Vogel, ‘Inside Art’, The New York Times, June 3, 2005, B30
Michael David Zellman, 300 Years of American Art