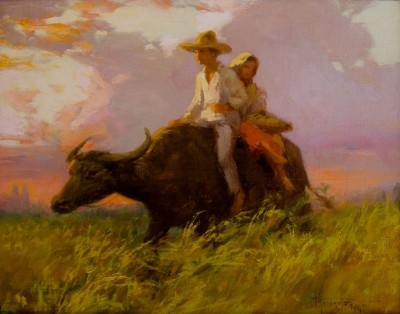 Fernando Amorsolo painted and sketched more than ten thousand pieces over his lifetime using natural and backlighting techniques. His most known works are of the dalagang Filipina, landscapes of his Filipino homeland, portraits and WWII war scenes.

Born in Calle Herran in Paco, Manila, on May 20, 1892, Fernando Amorsolo began drawing and sketching as a young boy. The family lived in Daet until the death of his father. At that time his mother moved the family to the home of her cousin, artist Don Fabian dela Rosa in Manila. Amorsolo was 13 years old at the time and in order to help provide for his family, he sold his drawings and began to study art under dela Rosa.

In 1909, he began studies at the Liceo de Manila and graduated from the University of the Philippines in 1914. After designing the logo for Ginebra San Miguel, Amorsolo received a grant to attend the Academia de San Fernando in Madrid from businessman Enrique Zobel de Ayala in 1916. A major influence in his painting style during this period was painter Diego Velasquez.

Fernando Amorsolo used family members as subjects for many of his sketches and paintings. When WWII broke out, Amorsolo continued to paint from his home in Manila. Instead of painting landscapes with bright sun filled skies, he did works that portrayed the human suffering and wartime scenes along with self portraits and the Japanese occupation soldiers of the time. Many of these paintings were exhibited in the Malacanang presidential palace in 1948.

Following the war he returned to painting landscape scenes of the countryside and portraits. He painted oil portraits of all of the Philippine presidents, revolutionary leader General Emilio Aguinaldo, and General Douglas MacArthur.

Due to the popularity of his works he cataloged them and developed a technique to paint them quicker to meet the demand.

Throughout his life Fernando Amorsolo worked as an instructor, a draftsman for the Public Works, chief artist for the Pacific Commercial Company, illustrator for children’s books and magazines, and served as Director at the School of Fine Arts before he retired in the early 1950s.

In the twilight years of his life, Amorsolo’s continued painting through declining health. He was married twice and had 13 children before a heart attack eventually took his life on April 24, 1972.