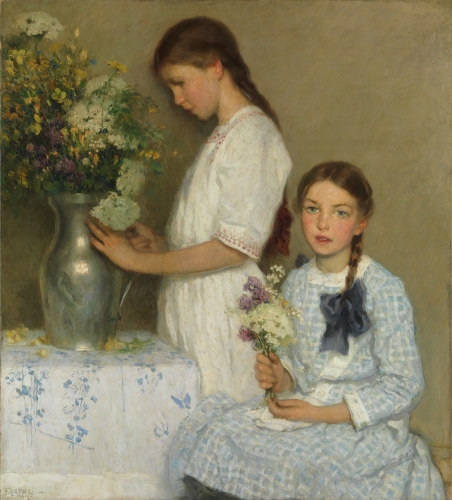 F. (Francis) Luis Mora was born in Montevideo, Uruguay on July 27, 1874. His father, Domingo Mora (1840- 1911), was a Spanish architectural sculptor. His mother, Laura Gaillard, had two sisters who married into the extended Bacardi rum family of Santiago de Cuba, and Luis Mora was their nephew. His brother was Joseph Jacinto Jo Mora (1876-1947), who would become a noted California artist.

In 1880, Domingo Mora accepted a position as Director of Design for the Perth Amboy Terra Cotta Company in New Jersey. Luis Mora was raised in Perth Amboy, receiving his first art instruction from his father. The family moved to Allston, Massachusetts where Luis Mora graduated from high school.

F. Luis Mora entered the Boston Museum School of Fine Art in 1889, when he was fifteen years old. His teachers were Frank Benson and Edmund Tarbell. In 1893, Mora returned to New York to work as an illustrator and to study composition with H. Siddons Mowbray at the Art Students League.

Mora’s life-long artistic goal was to adapt the techniques of the Spanish Old Masters into American modern painting. Mora frequently traveled to Spain to visit his extended family, and to paint. He also copied masterpieces by Diego Velázquez in the El Museo del Prado in Madrid. His patrons for Spanish scenes were Alfred Stieglitz and William Macbeth. He had a solo show of Spanish paintings in 1910 at the New York Watercolor Club.

In 1904, Mora was elected an Associate at the National Academy of Design, and became a full member in 1906. He was the first Hispanic to be elected to the NAD, and he became an exhibition jury member in 1907. Mora was also a member of The National Arts Club, The Art Students League, The Salmagundi Club, The Pen and Brush Club, The Architectural League, The American Watercolor Society, and many other art societies.

Mora won three medals at National Academy competitions, and he also won medals at the St. Louis World’s Fair Exhibition in 1904, and at the Panama-American Exhibition in San Francisco in 1915.

He was a popular teacher of figural drawing and painting, known as “Life Classes.” He taught at William Merritt Chase’s Chase School of Art, the renamed New York School of Art, at the Art Students’ League, the Art School at the Ethical Culture Society, and the Grand Central School of Art.

Mora’s first mural was commissioned by the trustees of the Lynn, MA Public Library in 1900. He also painted the dome of the Missouri State House, St. Louis in 1904, panels for Columbia College in 1909, murals and portraits for the Governor’s Mansion of New Jersey in 1911 and a monumental mural for The Red Cross in 1919 in collaboration with Major Joseph Kitchell. In 1937 he created the mural “Our Christian Era” for Dunn & Bradstreet for the 1939 Worlds Fair, as a commentary about wars waged among nations.

Mora was a prolific illustrator, often winning cover competitions. His illustrations appeared in Harper’s Magazines, Collier’s, The Century, The New York Tribune (now the NY Times), Red Cross Magazine, and many other publications.

Mora painted posthumous portraits of President Warren Harding and Andrew Carnegie, and dozens of eminent Americans and their children.

In 1912 Mora bought 28 acres in the Litchfield Hills, Gaylordsville, CT, where he and his wife Sonia completed their summer home and studio in 1922. Their only child, Rosemary Mora, was born in 1918 in New York City. Sophia Mora died suddenly in 1931 in Danbury Hospital, CT.

Mora ‘s second wife was May Safford, the widow of Ray Safford, an officer and director of Scribners Publishing Company.

Today F. Luis Mora’s paintings are held by thirty-four major art museums, including The Metropolitan Museum of Art, The Smithsonian Museum, The Newark Museum, The Hood Museum (Dartmouth University), The San Diego Art Museum, The Butler Museum of American Art, and The National Gallery of Canada.