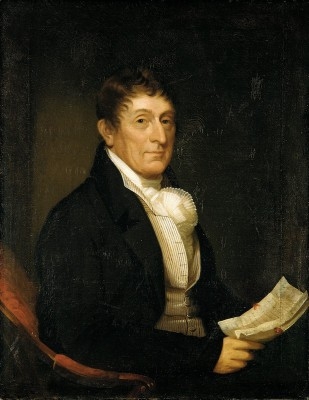 Born in Framingham, Massachusetts and living primarily in Albany, New York, Ezra Ames settled in Albany New York in 1793 and became the leading painter there in the early 19th century. Although he did many subjects, the majority of his works were portraits, especially local political figures, and he completed at least 450 portraits, mostly of New York legislators.

Portraitist Gilbert Stuart’s work was his inspiration for depictions of people with rosy toned flesh and direct gazes, but Ames’ style was much simplified from Stuart’s and, in the view of some art historians, lacked the vitality that Stuart conveyed in his subjects.

Ames first established himself as a painter of carriages in Albany, and then became an engraver, decorator, and portrait painter, gaining special recognition from an 1812 portrait of Governor George Clinton of New York. That painting is at the New York State Capitol.