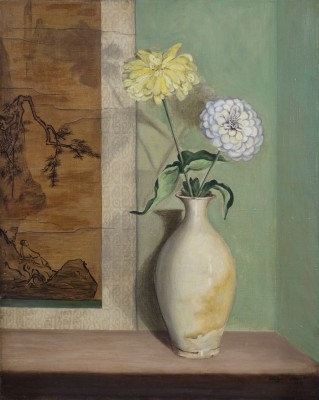 Ethelyn Cosby Stewart was born in Arlington, New Jersey in 1900.

She was an artist active in New York, NY, and studied with the prominent painter Emil Carlsen.

For a few years she designed textiles, worked in batik, and created lampshades before joining the staff of a New York gallery devoted to ancient and modern works of art and fine lighting.

Stewart was well known for her etchings and invented a process for printing copper plate etchings on soft materials that could be used for lampshade decoration. Her talent for interior design was so highly thought of by the National Academy of Design that for several consecutive years she was invited to show her work in the institution’s print room.

During the 1920’s, when batik designs were popular, Stewart’s work became highly sought after and celebrated. Examples of all types of Stewart’s work (batik, oil painting and etching) can now be found in many national museums of the USA including the Metropolitan Museum of Art, the National Academy of Design, and the Pennsylvania Academy of the Fine Arts.

Ethelyn Cosby Stewart’s paintings are in the collection of Pennsylvania Academy of the Fine Arts and the Smithsonian.