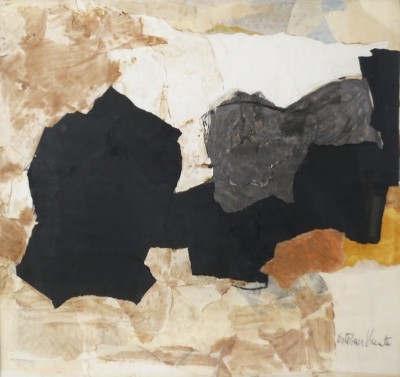 Of his painting Esteban Vicente said: …If I have to say something about the subject of my painting, I might say that it is an interior landscape. This image becomes the subject. It is always the same idea, the same image—from an accumulation of experience. I don’t know if one can actually identify this image. When I say ‘landscape’, I mean a structure. The structure of the painting is landscape—but not the color. That’s why I say they are ‘inter landscapes’. ”

Known for his Abstract Expressionism and Color-Field paintings in oil as well as collages, Esteban Vicente attended art school in Madrid at the Academy Belles Artes before moving to New York City in 1936. There Esteban Vicente became affiliated with the Action Painters in the 1950s including Willem and Elaine De Kooning. In “Art News” magazine, 1952, Elaine De Kooning had an article published on Esteban Vicente titled “Vicente Paints a Collage”.

Esteban Vicente had his first one-man show at the Ateneo de Madrid in 1928, and from that time entered many exhibitions in Spain including Barcelona as well as Madrid where his paintings are in the Reina Sofia Museum. In 1991, Esteban Vicente was honored by King Juan Carlos I and Queen Sofia of Spain with the Gold Medal for Fine Arts.