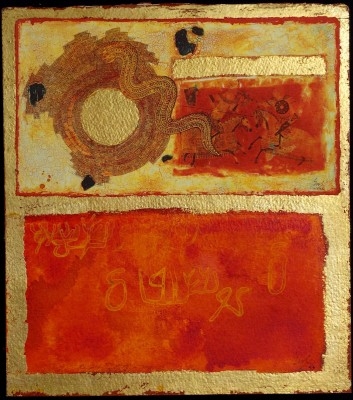 Erol Akyavas was born in Turkey in 1932. Akyavas studied at a wide range of institutions including the Fine Arts Academy in Istanbul, the Bedri Harmi Atlier, as well as the Florence Fine Arts Academy. Primarily known as a painter, Akyavas would later study architecture in the United States.

The artist received immeasurable experience working alongside A. Lhote, Fernand Leger as well as the famed architect Mies va der Rohe. After his architectural studies completed Akyavas kept a studio in the U.S. in New York, splitting his time between New York and Instanbul.

Akyavas had numerous exhibitions in both his native Turkey and abroad during his career. His work is included in numerous museum collections from New York to Berlin to Istanbul.

Over the course of his career Akyavas’ work was featured in over 36 different exhibitions. His talents as an artist were best described by the head of the Contemporary Russian Museum in St. Petersburg Alexander Borofsky in the exhibition catalog of “Icons and Iconoclasts”, “Erol Akyavas has passed through a good artistic school; in the course of his career, he contributed to many a modernistic trend. More than that, he actively worked in some of them, having grown as an artist within the mainstream of modernism and being faithfully devoted to the basic principles of modernism in their general outline…Erol Akyavas is mostly sensitive to the coloristic and plastic aspect of his works, which he regards as self-important and, naturally, is bound to aestheticize and individualize them.”