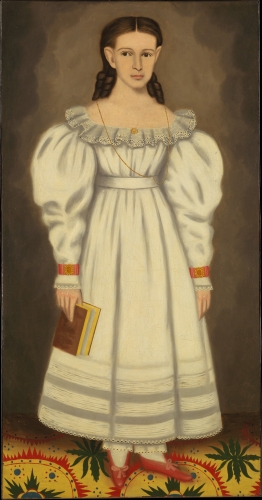 Born in Leverett, Massachusetts, Erastus Field kept his home most of his life in that state but did study briefly with Samuel F.B. Morse in New York City where he lived from 1842 to 1848. He was a folk portrait artist with little modeling skill, but is remembered for the social idealism exhibited by his subjects.

Unlike many of his peers who painted faces on pre-painted bodies, he did the faces first and the clothing addressed social position. He also did historical subjects, one of them being an American Centennial commemoration for Springfield, Massachusetts. He was also known for his scenes from classical mythology and Biblical history.

His wife was artist, Phebe Gilmore, who exhibited as Mrs. P. G. Field at the American Institute in New York City. The Fields lived first in Hartford, Connecticut, then in Monson and Palmer, Massachusetts from around 1832 to 1842. From 1842 to 1848 they lived in New York City.

While in New York City he began to ork with more difficult subject matter, producing The Embarkation of Ulysses” (c. 1844). In New York City he also became associated with the daguerreotypist Abram Bogardus, and on his return to Massachusetts in 1848 began advertising himself as a daguerreotypist. Using these skills, he based his portraits on photographs, and he also made hand-colored photographic portraits. After 1848, most of his paintings were biblical or historical subjects, sometimes adapted or copies from prints.

Returning in 1848 to Massachusetts, he and his wife lived for a time in Leverett and then Palmer before finally settling in Sunderland in 1859, the year of Mrs. Field’s death. Field continued to paint until after 1876, during which time he completed his most ambitious and well-known work, the grand Historical Monument to the American Republic (9′ x 13′) painted for the American centennial. The artist lived on in Sunderland until his death in 1900 at the age of 95.

Sources include:
Groce & Wallace, The New York Historical Society’s Dictionary of Artists in America
Peter Falk, Who Was Who in American Art